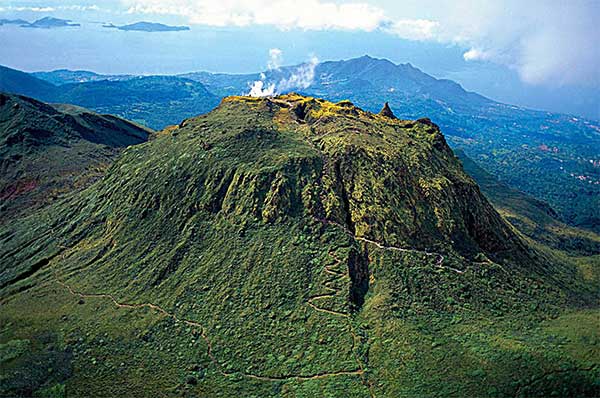 THE Caribbean is known mostly as an archipelago of volcanic islands. Although, the islands do not possess the lethal reputation of the Ring of Fire, many of them have volcanoes. Most of these volcanoes remain dormant while some have established a rather destructive history.

Of late, the most renowned in terms of calamities remains those of Montserrat and Martinique. Volcanoes also exist in the islands of Saint Lucia, Saint Kitts, Saint Vincent and the Grenadines, Dominica and Guadeloupe.

This week, Island Neighbours presents the “Volcano Awards” – an awards ceremony recognizing the uniqueness of the volcanoes in the region. The first award recognizes “altitude” and this award goes to La Grande Soufrière – an active strato volcano in Guadeloupe. This volcanic peak is known as the highest peak in the Lesser Antilles with height of 1467m high.

The next award goes to touristic appeal and this award goes to the Sulphur Springs in Saint Lucia. Known as the “world’s only drive-in volcano”, this site is very popular amongst tourists with a rating of 4 out of 5 on Trip Advisor.

Our last award goes to the “Most Destructive Volcano”and it goes to none other than Mount Pelée of Martinique. This volcano is credited with the complete destruction of the town of Saint Pierre (a town of 30000 people) in 1902.

Have you visited any of these award-winning landmarks? Tell us of your experience on Facebook: Island Neighbours.

Happenings
The nature isle is abuzz with activity. We know why. Christmas is approaching. The Arawak House of Culture is one of the places where sleep never comes. Today, you are invited to a Classic and Jazz Concert. This is a fund-raising initiative and will feature acts from Martinique, Guadeloupe, Dominica and Paris. Talk about helping a neighbour in need! Elsewhere, Alliance Francaise (Dominica) cordially invites you to another edition of Lyrics Under The Stars on Saturday December 3. This edition features acclaimed Barbados poet and short story writer Philip Nanton. The event begins at 7;00 p.m.

Neighbourly GetAways
We know that the explorer in you is aching to be released into the wild of the Island Neighbours. For this reason, we would like to suggest a visit to La Grande SoufrièreVolcano in Guadeloupe. Climb the dome of the volcano, relax in hot baths or visit the volcano observatory. All of this will enable a deeper understanding of volcanic activity. Bring along your journal and camera to document for future referencing.

Let’s go Shopping!
Calling all shopaholics! Shopping Guadeloupe is indeed a therapeutic activity. Shopping centres are well-equipped with the latest in fashion, cosmetics and fine wines and spirits. Point-a-Pitre and Basse-Terre are ideal for domestic or commercial shopping. If you’re a business owner, bulky shopping is available at cheap, convenient prices. You may even shop for your family, friend or simply immerse yourself in retail therapy. Live a little! Shop a little!

History
Historical note! Did you know that La Grande Soufrière erupted in 1976 with no loss of life? Getto know your neighbours!