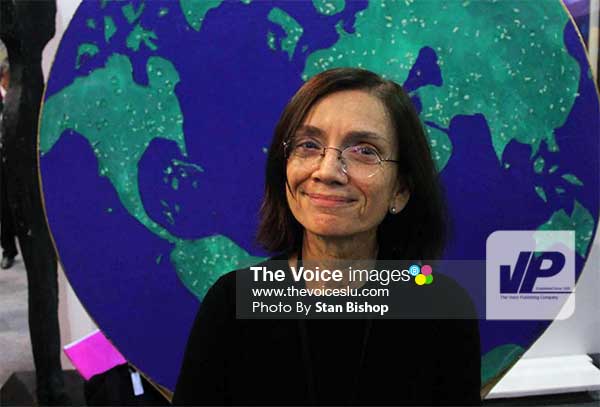 Share this post
DESPITE U.S. President-elect Donald Trump dismissing climate change as an “expensive hoax”, many environmentalists have indicated that they will not sit by and allow him to undo the huge step the United States made by ratifying the landmark Paris Agreement.

Professor Andrus has also taught environmental health at the university level, helped to administer, and direct a centre for global health and attended almost every Conference of Parties (COP) since the one held held in Rio, Brazil while working in Washington, D.C. as an assistant to the Head of Research for the U.S. Forest Service. She has been involved in crucial research that pertains to forests, watersheds, wetlands, migratory species, and trans-boundary pollution.

“I came (to COP22) with a strong science background and a real appreciation for how invaluable our international partners are,” Professor Andrus told The VOICE on Saturday. “To solve today’s problems, especially the critical ones facing us, we need to appreciate each other and work together.”

Professor Andrus said her environmental matters work has sounded an alarm for climate change for well over 20 years, likening her story to that of Dr. Martin Luther King Jr., whom, she said, inspired her and her husband, Marc.

“MLK led people across that bridge in Salem to bring about change, knowing that they were probably walking into death’s way. But they were connecting at the level of the heart where justice for other people meant more than their own lives.,” Professor Andrus explained.

As had been her hope at previous Conferences of Parties (COPs), Professor Andrus said she would love to see a part of the high-level international meetings dedicated to issues of trade, science and technology, “that we begin with the recognition of our humanity that connects us.”

“This is both a dangerous and exciting time, a time of possibilities. The climate change challenge is very big. But if we’re going to succeed, it doesn’t mean that companies will not be productive or that people won’t make money. I think the most creative solutions will be found if we start that process at the level of the heart,” Professor Andrus explained.

The United States ratified the Paris Agreement on September 3, the same day as did China, which she said “made a great difference.” (Saint Lucia ratified the Agreement on April 22). However, she added that it was difficult for her knowing that Trump has stated that he does not believe in climate change and wants to take back funding support. She believes climate change matters are bigger than even the American presidency.

“All I can say is that the United States is more than one person,” Professor Andrus indicated. “Right now, there are thousands of people marching in U.S. cities saying that they’re very distressed at the recent election. So I believe that democracy and the people continuously using their voices will have an effect on what the President-elect and the new Congress will do. Besides, we have mid-term elections in two years’ time whereby we will have the chance to put people in Congress that can change the balance of power.”

Professor Andrus is attending COP22 in Marrakech, Morocco with her husband, who is representing the Episcopal Church which covers 17 countries and comprises over 2 million people. She said the church has a strong base, enough to influence governmental policies.

The Episcopal Church was provisionally admitted as an observer organization to the United Nations Framework Convention on Climate Change (UNFCCC).

“We are very proud of our democracy. I mean, Mr. Trump won an election; however, we’re not going to stop advocating for what we know is important, as Professor Andrus said.

A wide variety of technology is on show in Marrakech for this year’s conference which seeks to discuss ways of implementing the agreement signed in Paris last December, including adaptation, transparency, technology transfer, mitigation, capacity building and loss and damages. She said she has so far been impressed with the positive light emanating from the so-called continent.

“I think there’s so much on the African continent relating to solar power technology that I’m interested in learning about,” Professor Andrus said.