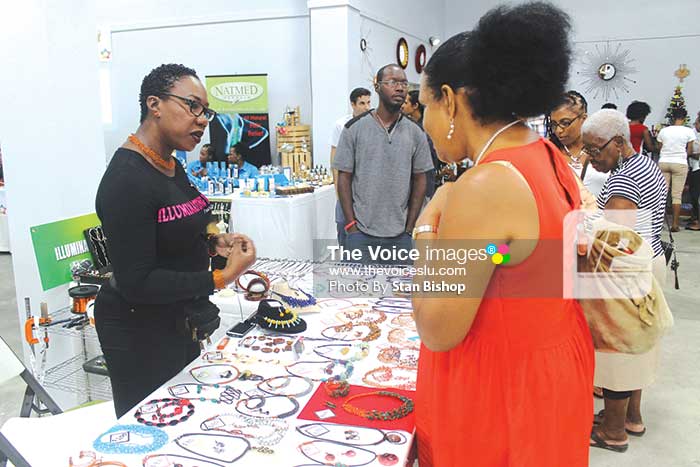 A great deal of praise is already being expressed for the ninth annual Saint Lucia-Taiwan Partnership Trade Exhibition held over the weekend. However, despite the best efforts of the organizers, some key aspects need to be addressed going forward, some say.

The exhibition ran from Friday through Sunday and saw the participation of 65 Saint Lucian and 7 Taiwanese companies showcasing their goods and services. Hundreds of patrons attended the event held at Johnsons Centre in Rodney Bay to either purchase or network with the exhibitors.

During last Friday’s opening ceremony, Minister for Local Government and Culture, Fortuna Belrose, told the exhibitors to make the most of the event by showcasing their innovation, adding that the exhibition “serves as a perfect platform, not just for the importers and traders, but also for the new investors.’

Gros Islet resident Zandilli Lucien was a first-time participant in the exhibition and specializes in finger-knitting to create neck and arm pieces. She took up the craft about a year ago and decided to take her business to the next level by attracting more awareness. So far, so good, the former St. Joseph’s Convent business student said about her participation in the exhibition.

“The response has been overwhelmingly positive,” Lucien told The VOICE. “I’m really happy that I decided to take part. I have people coming to me and just being amazed to see me knit on my fingers. I’ve gotten a lot of orders and positive feedback from everybody.”

Another first-time exhibitor, Yvonne Layfield, owns the business, Kako, which features an all-natural skincare line of products made locally from ingredients such as nutmegs, cinnamon, grapefruit, coconut, among other things. Her products include body oils, moisturizers, cleansers, toners and exfoliators. She praised the organizers and patrons for allowing her the opportunity to build her business network.

“Everyone’s been very supportive of my business at the exhibition. They like the look and feel of my products and are very impressed. Most of all, though, I want to push the business as far as I can to ensure that I continue producing products that help people live a healthy lifestyle,” Layfield explained.

Patrick Velinor, owner of Vel’s Multi-Services, has been producing local wines for the past 16 years. His vast collection, which numbers near twenty, includes wines made from locally-grown plants and fruits such as latanyé, jamoon, pineapple, wax apple, moringa, mauby, cherry, guava and pomegranate.

Velinor is a regular at the exhibition and indicated that the annual event is partly responsible for his products getting the visibility and sales they need. He said his products have even gained special attention from the Taiwanese embassy which has bought and shipped a few bottles to Taiwan.

“I’ve had some sales at the exhibition. However, most people are just into sampling the wines, which is good because it’s another form of marketing,” Velinor said.

However, EthelinaLansiquot, who specializes in jams and jellies, told The VOICE that while her previous experience at the exhibition had been impressive, the opposite was true this year.

“Things were not that good this year,” she lamented. “Last year, things were better. Even worse, no minister saw it fit to come and see what we have. They were here for the opening ceremony on Friday but never walked around to meet with us, which was the normal thing to do before. That is not right.”

This year, consumers got to choose from a wide array of goods and services, including household items, arts and craft, jams, jellies, electronics, clothing, books, laptops, teas, interior decorations, rums, insurance, soaps, confectionery and fruit juices, to name a few.

Since 2008, the exhibition, which is jointly organized by the Department of Commerce, International Trade, Investment, Enterprise Development and Trade and the Embassy of the Republic of China (Taiwan), has been used as a platform to stimulate local trade and also have Saint Lucian and Taiwanese companies interface with each other.

Beginning with a handful of companies in its inaugural year, the exhibition has grown to the extent that organizers have indicated that its current venue has become too small as have the previous in terms of hosting exhibitors. This year, a record number of participants took part in the exhibition, many of whom have already indicated that they hope to do so in coming years.

“The truth is that in most cases, before one can produce for the external market, one must be able to establish a firm foothold in the domestic market,” Preville said at Friday’s opening ceremony. “For this reason, this annual trade exhibition is as important an activity as any on the road to international competitiveness.”

Preville said local businesses need to network and build alliances to capitalize on new opportunities that emerge in the ever-changing global marketplace.

“The world where businesses work in isolation, hoard information and attempt to undertake all business activities on their own is long gone. This is a recipe for failure,” Preville cautioned.

Preville said that while large quantities of Taiwanese goods are already being imported into Saint Lucia, there remains an absence of close business ties between the two communities. Nevertheless, he welcomed the exhibition’s primary objective of creating the cross-fertilization of business ideas and promoting increased trade between Saint Lucia and Taiwan.

“There is the opportunity that the trade exhibition presents for direct investment by Taiwanese businesses into Saint Lucia. This has not yet materialized but is worth exploring. We have had some preliminary interest from Taiwanese businesses people resident in the United States in examining the possibility of investing in Saint Lucia but this has not yet materialized. The event can, therefore, grow to become both a trade exhibition and an investment forum. The investment into Saint Lucia can take the form of direct investment by Taiwanese investors or through joint ventures,” Preville explained.

Meanwhile, Ambassador Mou indicated last Friday that a trade delegation from Saint Lucia is expected to visit Taiwan soon for a reconnaissance tour of that country with the objective of creating deeper trade ties between the two countries.