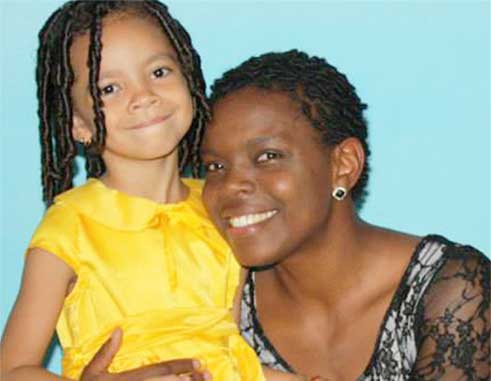 Whilst today’s FITC is not part of two worlds, her two children are, but the focus here is on her six year old daughter who lives with her right here in St. Lucia.

Nisha Charles is a Dominican native who lives in St. Lucia: however, this dark skinned News Anchor is usually turning heads when seen with her light skinned bi-racial daughter.

Oftentimes, she is mistaken for a babysitter whether in St. Lucia or abroad.

Now this issue is clearly not confined to Charles as my inspiration behind this interview came after reading about the plight of a single white mother of a bi-racial daughter in the Huffington Post yesterday.

In the article, the blonde mother talks about the common misconception that the child is not hers or that her daughter was actually adopted.

The highlight came when she had finally had enough of the offensive questions and one day responded to; “Where did you get her from?” by saying; “My uterus!”

With such a case, one could only imagine that the case of a black mother with a bi-racial child would be very different but also similar…My guess was not wrong

The VOICE: Tell me about your little princess and describe your relationship with her.

Nisha: She’s a handful…half me, half her dad who is Canadian of German descent and we have a wonderful relationship. She’s a fierce little girl who speaks her mind and is very protective. I’ve raised her alone since she was one and a half years old. She’ll be seven in 2 weeks. We share a unique bond.

The VOICE: As a dark skinned woman with a bi-racial child, what goes through your mind when you look upon your daughter and see the differences in your colour etc…in fact, is it something that you even notice?

Nisha: I only notice her complexion when other people do. Like they’ll say; “Is she yours?” As if black women can’t have fair babies! She is as much mine as I am hers because we are quite similar. She has a lot of my features but is just fairer skinned!

I don’t worry about how people treat her in the Caribbean because we have this notion that lighter skinned is more coveted; sad but true, but she reminds me all the time that we’re all the same.

The VOICE: What is the general reaction from folks in St. Lucia and Dominica when they see you walking around with your daughter and how does it make you two feel?

Nisha: St Lucians seem to think it more “normal”. Maybe there are more interracial families here, but in Dominica, they look at it as if my daughter makes me more of an acceptable human being. I couldn’t care less and neither could my daughter…children don’t see colour unless we teach them to.

The VOICE: What has been your most outrageous experience/reaction from anyone in general towards you two?

Nisha: Someone once asked; “Where’s her mother? She can’t be yours…she looks nothing like you!!!” They thought I was the sitter. I was quite annoyed and was like: “Who the hell are you?”

The VOICE: What are some of the challenges that both you and your daughter have faced in the past and still face today, simply because of her mixed race?

Nisha: I don’t think I’ve come across any thus far. So far it seems to be to my benefit really. If others look at it another way, well that’s their problem, not mine

The VOICE: When you found out that you were expecting, did you and her father consider the challenges that would come along with raising a child in a world that is still marred by racial tensions? Because surely eyebrows are raised by both blacks and whites wherever you go be it in the Caribbean, US or Canada.

Nisha: We did…more so for Canada. People obviously raise their brows in the wrong way, if the child is darker than their white counterpart, his own parents are racists and have an issue accepting our children. They think that black people are rude, savage and have no manners, but the Caribbean seems to be quite the opposite. I was always quite proud of where I came from and my skin colour so it never moved me…and my daughter turned out to be the same.

The VOICE: Whilst as you mentioned, in the Caribbean she is coveted, what about on her father’s side…especially the German side, what is that relationship like?

Nisha: Sadly she hasn’t met his side of the family but from what I know of her brother they’re still getting used to him

The VOICE: Wasn’t that difficult for you to not only maintain a relationship and then to go on and have children with a white man, knowing that his parents and family are racists and not willing to accept you and your children just because of your skin colour?

Nisha: It was but I didn’t care. I was having my child, whatever colour she/he turned out to be. I was more interested in my nuclear family than that extended one. It worked at the time. I had the heartache of my family not accepting her father when I had my son and I paid that price…by then, there wasn’t much to lose, I’d already cut ties…I was only interested in growing my present family.

The VOICE: What are some of the strongest lesson that you are trying to drive home to your daughter to not only open her eyes and get her ready for the big world, but also to teach her to be fair to others as like you rightly said, lighter skin in the Caribbean is coveted.

Nisha: I showed her early on that although she was my princess she wasn’t better than anyone else. I showed her that respect is earned and skin colour is just that. I taught her that how she treated people and being kind were far more valuable than how pretty someone perceived her to be…although she is drop dead gorgeous. (Laughs)

The VOICE: Finally, as a black woman, it is expected that you teach your daughter about her black roots…but how do you go about teaching her about the other half of her race?

Nisha: Well. I can only teach her about what I gathered from her father…that part is left up to him…hopefully shell get that chance sooner rather than later, or when I have the chance to take her there so she can experience it.