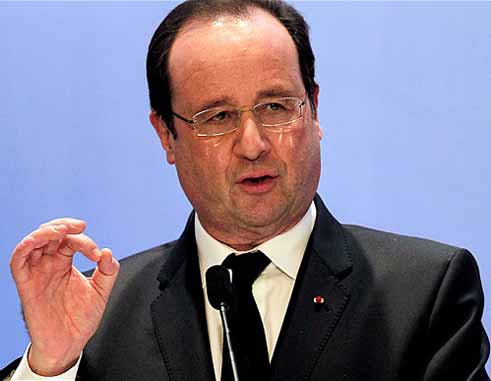 On January 20 next year, to a performance of the president’s anthem, “Hail to the Chief”, and the vice-president’s anthem, “Hail, Columbia” a 21-gun salute from the howitzers of the military district of Washington will herald the swearing-in of President Hilary Clinton as the 45th President of the United States of America; unless she has already been torpedoed by the FBI’s renewed interest in her cyber-history.

Within weeks of this tragic event France begins the process of electing its own Head of State and the showground of political surprises will move across the Atlantic.

In Europe the voting class has massed into the form of a battering ram designed to smash down all political order, like skittles. The 2017 French presidential election is set to be like none other in that country during the modern-era. The world has become a place where what is not supposed to go wrong does go wrong and President Francois Hollande looks ready to become one of only two French Presidents not elected for a second term.

The other, the man he beat in 2012, Nicolas Sarkozy, is also a candidate this time around but is struggling to get past the November primaries to clinch his Party’s nomination.

Likewise 62-year-old President Francois Hollande is more unpopular than any president since Charles de Gaulle returned to power in 1958 and ushered in the Fifth Republic. Hollande is having to face the indignity of an unprecedented challenge from within his own party and for the first time both France’s two main political parties are holding primary-contests.

But I venture that neither of these men will receive any telephone call in the early hours of the morning of 8th May from the White House switchboard, asking politely “Please hold for the President”. President Clinton will be connected to someone else, the person just elected as the new President of France.

French is a superpower and our nearest and most potent neighbour here in Saint Lucia. Martinique a Régiond’outre-mer (Overseas Region) has powers identical to those of the integral provinces of metropolitan France. The Island is represented in the National Assembly, Senate and Economic and Social Council, it elects a Member of the European Parliament, and uses the Euro as the currency. What happens in France happens to a considerable extent here in the Lesser Antilles in the Eastern Caribbean Sea.

Supporters of the centre-right Republican Party are preparing to vote in their primary this month and there are already 12 declared candidates all keen to go head to head with incumbent President Hollande and deny him a second term of office. He is being challenged within his own party for the socialist nomination by his former Economy Minister Emmanuel Macron. Speculation is growing that the President will quit altogether and not try and seek the nomination as the first incumbent to reach such depths of unpopularity.

Sarkozy, a divisive figure, is the first former head of state to try and reclaim the top job but there are doubts that he will get that chance. He faces a fierce battle from within his Party before he can secure the Republican nomination against the Mayor of Bordeaux, Alain Juppé, the 71-year-old moderate and former Prime Minister.

The final Presidential duel looks like shaping up for Alain Juppé to edge out far-right leader Marine Le Pen for the ultimate prize.

But while she may not eventually win, polls have consistently shown that the National Front’s Le Pen is the strong favourite to take the most votes on the first ballot. It’s the first time the anti-Euro party has been a front-runner and Marine Le Pen is the candidate making the running as the French seek a leader to shake the country out of its economic malaise. Polls give Le Pen between 25% and 30% in the first round, making her the candidate to beat.

Madam Le Pen attacks the European Union as voters’ satisfaction with the bloc plummets and Le Pen is setting both the tone and the agenda – the debate will be determined by her anchor-point and she will set many of the issues that will dominate the political agenda for the new presidency.

Alain Juppé is unapologetic in his enthusiasm for the European Union and favours making Brexit negotiations as punishing as possible, risking a new crisis of unnecessary damage as a result or his hard-line.

So however unlikely, a Sarkozy victory in the primary would blow the race wide open and would lead to a runoff between the most extreme Republican and Le Pen or if it split the first round ballots enough to allow a vulnerable candidate like Hollande or the left-winger Jean-Luc Melenchon through they could be left to face the National Front leader.

A recent poll showed that if Hollande runs and manages to make it to the second round, he will lose by 54% to 46% to Le Pen, who has promised a referendum on whether France should leave the EU.

Republican supporters will have the first say in the process, choosing their candidate over two rounds on 20th November and then again on 27th. The Socialists will hold their own primary in January and the presidential election begins on 23rd April 2017.

Once the parties have concluded their primaries the Republican winner will become the favourite and whoever wins the Republican vote will immediately be tipped to defeat Le Pen in the runoff, making the primary almost as important as the election itself.

British officials preparing to negotiate their exit from the European Union are paying particularly close attention to the French election campaign and Juppé in specifically. At the end of the process he is most likely to win and is already insisting on EU negotiators taking a harder line with the British, according to an adviser. All of this will have some effect in determining if there is to be a ‘hard’ Brexit or a ‘soft’ Brexit or something in between.

BREXIT UPDATE – SO FAR SO GOOD
Last week the economic indicator on Britain’s GDP performance were published for the first full quarter since the UK Brexit vote, defying recession fears and portents of doom. The British Treasury’s worst-case “severe shock” scenario had pessimistically predicted a 1% in the three-month period. They were wrong, UK GDP rose 0.5% between July and September, well above the forecast recession that many claimed would follow the country’s decision to leave the European Union. While 0.5% may seem modest, any percentage on a GDP figure of £469,124m is a lot of money and a lot of investment.

Britain continues to confound those who have predicted that the Country and its economy cannot function outside the EU. The critics are wrong and that’s good news for nations who rely on a strong UK economy and partner. The UK economy is still the fifth-largest national economy in the world measured by nominal GDP, comprising 4% of world GDP and it’s the second-largest economy in the European Union and still growing.

Enthusiastic consumer spending has led the way during the last quarter’s economic growth, with retail output up 1.8%, accommodation and restaurants up 1.7%, and the category including cinema ticket sales booming by 16.4%. That’s more good news for those concerned that the first retraction would come in the form of UK consumer spending, the key driver for tourism spend.

The British economy will need to adjust to a new relationship with the EU, but it’s well placed to deal with the challenges and take advantage of opportunities ahead and a smooth divorce from the EU is in everyone’s interest.

John Kennedy is President of the British Caribbean Chamber of Commerce Saint Lucia and CEO of Boka Group. The views expressed in this Column are his personal views.