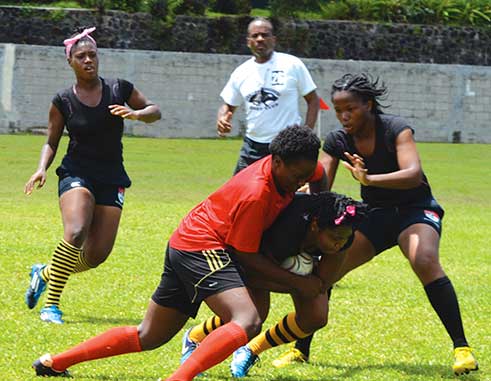 IT was near perfect weather as sea, sand and rugby balls combined to make the inaugural Beach Rugby Fives Tournament hosted by the Saint Lucia Rugby Football Union an unqualified success.

The one day tournament, held at Vigie beach on Sunday did not disappoint the many spectators as the various teams geared up to claim bragging rights of being the first champion of beach rugby in Saint Lucia and, of course, to take home the monetary prize.

In the end, Le Sport Rugby walked away as the female champions winning all three of their matches at 3 – 0, 6 – 2 and 5 – 2 against Whiptail Warriors. Top scorers of the winning team were Nelta Samuel, Renatta Fredericks and Marline Cherry.

In the male category, Rogues led by team captain Ervin Joseph also won all their three matches against Whiptail Warriors. The scores for the matches were 8 – 3, 9 – 4 and 8 – 5. The top scorers of the Rogues team were Neighman Lascaris, Jerry Charles and Ervin Joseph. The matches were officiated by tournament`s head referee Garner Felicien.

According to the Saint Lucia Rugby Football Union, the initiative was well received by the newcomers who played for various teams and by supporters who energetically cheered for their teams. SLRFU was pleased to witness the success of this initiative and plans to make it an annual event. The Union is grateful to all individuals and groups who assisted in the staging of this tournament.

Rugby is a sport for all and the SLRFU, in its quest to bring all forms of rugby to Saint Lucia and encourage persons to join the sport will be holding a local 15-a-side game in December. This will be a precursor to the 15-a-side league the Union intends to hold in 2017. In addition the Union intends in 2017 to have a drive to introduce the sport to both primary and secondary schools throughout the island.