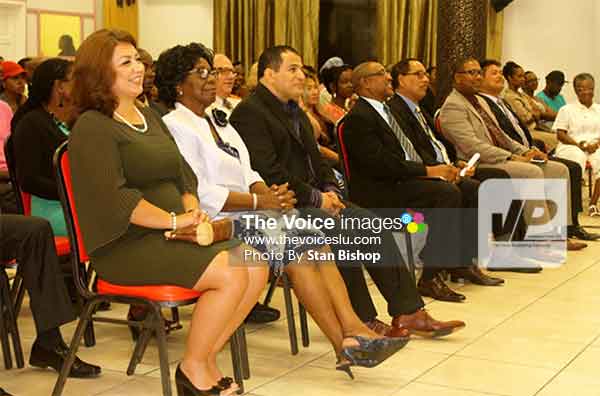 THE art of being successful in business by becoming entrepreneurs was the subject of a four-day Global Wealth Trade (GWT) Caribbean Conference held at Golden Palm Events Centre in Rodney Heights last week.

The conference brought together entrepreneurs from across the region who gave testimonials that they have either become full-time GWT salespersons or do so part-time to supplement their fixed income.

Based in Canada, Global Wealth Trade is a top-level designer in luxury jewelry and apparel with clients having the ability to become members and receive significant discounts on their purchases. The company manufactures two of the world’s top designer brands, Feri and Feri Mosh.

Global Wealth Trust (GWT) CEO and founder, RaminMesgarlou, who was present at the conference, said there is need for a company such as his, especially since many people around the world are struggling to make ends meet due to inflation and other economic factors.

Mesgarlou said most people already have two jobs because they are quickly finding out that having one job is not enough to make ends meet. He said people need a flexible way of generating income, which is what his company has been affording them to do for the past 26 years.

“Our products are gorgeous designer products. However, the main products we sell are financial freedom and financial security – being able to escape this tyranny of inflation,” Mesgarlou said.

The company has a global reach that includes 165 countries and is said to be the fastest-expanding luxury designer since 2008 and fastest-growing direct sales company since 2005. Mesgarlou said a common denominator defines the world: everyone wants great stuff and opportunities. GWT, he added, has brought those two elements together.

“I started this business in my home office,” Mesgarlou said. “We had five office expansions in the first five years. Now we’re looking for an even bigger place by next year. So it comes down to being able to invest where you need to and proper financial management is key during those early years.”

“Unbelievable”, was Mesgarlou’s response when asked how he felt upon hearing some GWT members give their testimonials at the opening ceremony last Thursday. “It just tells me that in this industry the opportunity that GWT offers is an equalizer. It doesn’t matter what colour or religion you are or where you’re from: if you have a spirit to get out of the status quo, then do it.”

He added: “Too many people are stuck in a job and have no future there. So whenever I come here and see the opportunities are working out just as in Australia, Europe, Canada, America or Africa, I know we have the right platform for entrepreneurs around the world to get involved and hit a financial home run.”

Mesgarlou, 48, who said he made his first $1 million at age 25, said his primary object at the conference is to inspire at least one person to become the next millionaire.

“I’m now 48 and my life has been good for a long time. It’s not about me, anymore; it’s about the next achiever. Life is not about achieving happiness but about happily achieving,” Mesgarlou said.

Global Wealth Trust’s reach is spread across 165 countries, including 27 in the Caribbean. The company was first introduced to the Caribbean seven years ago, with St. Maarten being the flagship destination.

Mesgarlou said he was scheduled to meet with Prime Minister Allen Chastanet to pitch his business concept aimed at creating employment for Saint Lucians. He is even advocating that his business model be taught in schools.

“It’s the same message I give to all dignitaries in every country we go to: make it easy for people to start a business,” Mesgarlou indicated. “In Saint Lucia, I find the people to be warm and entrepreneurial. However, the problem is that there are the same problems here that are faced in other Caribbean countries whereby it is almost impossible for entrepreneurs to do business.”

Vernisha Charles-Jones, who lost her job at a local telecommunications provider some years ago, became frustrated after being turned down for job interviews afterwards. She signed up with GWT in 2012 and is now a GWT Ambassador and Leader for Saint Lucia.

Charles-Jones said her three reasons for joining the programme four years ago are that she wanted to do more for and spend more time with her parents, have freedom of choice in terms of financial security and balancing quality family time as a mother and wife, and wanting the power to manage her own successful business.

“While many businesses get better with local people patronizing them, the fact is that money is only exchanging hands in Saint Lucia,” Charles-Jones told The VOICE. “However, what I’m doing allows me to take money from outside and bring it to Saint Lucia. That means I’m increasing the amount of money generated here. My personal mandate for the next five to ten years is to help 100 Saint Lucian families generate an additional CAD 2,000 (Canadian dollars) per month.”

She said that while some people would be skeptical about joining the GWT programme, she has been able to realize financial freedom, something she hopes to help others in finding.

“It works and I am it. Because it’s worked for so many others, it’s not about trying it. If you’re serious about wanting to take charge (of your financial freedom), then come and ask us about the things you do not understand. Get educated to make an informed decision,” Charles-Jones said.

Permanent Secretary in the Ministry of Commerce, Titus Preville, who has been a member of the programme for some years now, addressed the conference, saying companies like Global Wealth Trade Corporation can play a crucial role in transforming the lives of people.

“The company has distinguished itself as a cut above the rest based on all the accolades that it has received along with its AAA+ rating from the Better Business Bureau of Canada,” Preville said. “From all that has been published about GWT in respected magazines such as the American Business Journal, Canadian Business Journal and Direct Sales Business Journal, and given that the company has been around from 2005 and gas expanded in over 150 countries, I am of the opinion that this company is a viable and respected business.”