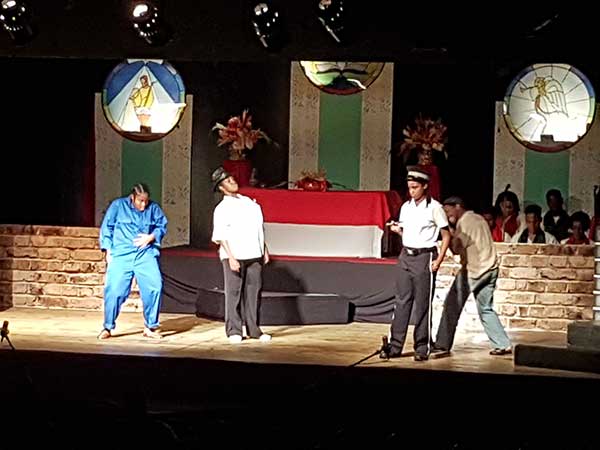 THE DEVIL AT CHRISTMAS by Roderick “Roddy” Walcott was performed at the National Cultural Centre last night. It is not easy producing a stage play, it is challenging enough to produce a musical but to do such with a gaggle of teenagers takes a special group of people. Such is the caliber of June Frederick and her team at Kiddie Crew. June is determined to introduce the generations to the works of Roddy Walcott and for that I thank her. I was not around for the original production and neither were the performers on the stage last night. We both appreciated the play and thank you to the Walcott family for allowing the production.

Now the Holy Rollers in my life dun start already. With no knowledge of the story they dun start with the comments. So for them and the rest THE DEVIL AT CHRISTMAS is about the redemption of a man, who over 40 years has danced the character of Papa Jab on the streets of Castries. Told by the adult Emanuel, in flashback we watch when as a seven year old he meets the man on the steps of the Cathedral dying, listening to the Christmas Day Mass. Yet in a last herculean effort he performs the street dance that many of us remember from our youth and lament the loss due to modernity. His last performance is in keeping of a promise to of all persons the RC Priest though he dedicates the dance to Emanuel. It is the Priest who cradles the dying man in his arms. It is the Priest who defends him to the crowd. It the Priest who calls him friend. So my Lucians it is not about Obeah!!!!

The audience was a good one but in my humble opinion could have been larger. Many will point out that Jounnet Creole was last weekend and everybody broke. I disagree. As important as Jounnet Creole is – the children of this Nation are more important. Leave $50 at home. Spend all you want at the fete with the $50 secure at home my people could have come to support “De Yute” We are so quick to point at what our children do wrong yet we in turn fail them so completely when they “do the right thing”*

In the days to come the stars of the show will justifiably be praised as will be the Director. Papa Jab, Bajan Police, Emmanuel all were great in their roles. This time round I want to focus on the non-traditional.

Set design. Not construction though that was good. I refer to the layout of the stage. I do not know if this was done to specifications laid out in the script notes, but the layout of the stage allowed for smooth transitions from action to action. As a theatre lover I am always stressed at the time it takes to move from one scene to another. It was my lamentation for last year’s production of the Legend of Tom Fool. Not here – no sah! Smooth as silk! Well done.

Then there were the Tar Babies. Mama! The program gave the names of the Cast but not the characters they played and so all I can say is this: They were deliciously evil, absolutely black, agile beyond compare and seemed to enjoy invoking terror into all, a bit too much. Magnificent performance. If they had a line in this production it was “Grrrrr” proving that you do not have to be the star of the show to leave an impression.

If I am to be nitpicky it is to lament that I was not able to tell you the names of the tar babies who wowed us so. But I am content that they know themselves.*

Once again to June and the Crew – a job well done and I am well pleased.*