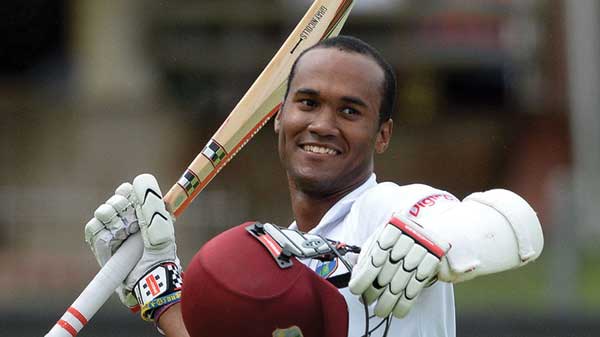 Opener is 95 Not Out In Final Pakistan Test.

SHARJAH, United Arab Emirates, Oct 31, CMC – Phlegmatic opener Kraigg Brathwaite marched to within touching distance of his fifth Test hundred as he spearheaded a West Indies fightback against Pakistan on the second day of the final Test here Monday.

Replying to Pakistan’s first innings of 281 all out, the Caribbean side reached the close at the Sharjah Cricket Stadium on 244 for six, only 37 runs adrift of taking first innings lead for the first time in the lopsided three-Test series.

Brathwaite was unbeaten on 95 in a knock that has been the bedrock of the West Indies innings, which flirted with crisis at 68 for four about half-hour after lunch.

The right-hander faced 206 deliveries and counted ten fours, and anchored two key partnerships which pulled his side around and left the game evenly poised heading into the pivotal third day.

First, he put on 83 for the fifth wicket with Roston Chase who produced his first significant score of the series with an even 50, before adding a further 83 with fit-again wicketkeeper Shane Dowrich, who made a stylish, if chancy, 47.

Earlier, teenaged seamer Alzarri Joseph picked up the last two wickets to fall as the hosts added 26 runs to their overnight 255 for eight, before they were dismissed about 35 minutes into the morning

In the eighth over of the day, Joseph had Mohammad Amir dragging on for 20 and four balls later, knocked over Yasir Shah in similar fashion for 12.

Faced with a tricky period before lunch, West Indies found themselves quickly in turmoil when they lost opener Leon Johnson (1), Darren Bravo (13) and Marlon Samuels without scoring, to slide to 38 for three at the interval.

The left-handed Johnson perished in the fourth over with six runs on the board, lbw to one from left-armerWahab which came back to beat an uncertain defensive push.

Bravo then spent 29 deliveries at the crease and counted two fours before attempting to hit left-arm spinner Zulfiqar Babar over the top and slicing a catch to cover where Amir took a diving catch at 32 for two.

And in the penultimate over before lunch, Samuels pushed forward to leg-spinner Yasir Shah to the 10th delivery he faced and was adjudged lbw.

Jermaine Blackwood, not yet off the mark at the interval, produced a typical cameo afterwards with a run-a-ball 23 which included four boundaries as he helped add 30 for the fourth wicket with Brathwaite.

But the right-hander’s ambition cost him in the seventh over after lunch when he drove at one from Amir not quite there for the drive, and edged to AsadShafiq at gully.

The fightback began as Brathwaite and Chase combined to frustrate Pakistan for the remainder of the session and steer West Indies safely to tea without further loss, at 141 for four.

Brathwaite, on 21 at lunch, inched to his half-century 25 minutes before tea off 109 balls with six fours and was 55 not out at the break while Chase played positively to be unbeaten on 43.

Chase notched his maiden Test half-century in the second over following the resumption when he cleared the ropes at long on with Yasir but in the next over, he sliced a drive to Younis Khan in the cordon to give Amir his second wicket.

Chase struck six fours and a six off 89 balls.

Pakistan’s hopes of triggering a collapse were dashed as Brathwaite and Dowrich offered resistance, helping West Indies to battle their way into a strong position.

Brathwaite was dogged in his approach but showed signs of aggression when he collected two leg-side boundaries in one over from Wahab as the final hour approached.

He moved into the 90s with another boundary off Wahab but remained agonisingly short of three figures as the day wrapped up.

Dowrich, meanwhile, was off the mark in style, stroking Yasir to the backward point boundary before repeating the stroke off the same bowler with the identical result a couple of overs later.

He enjoyed a slice of luck on 15 when he was caught at gully by Shafiq off a Wahab no-ball and was let off again on 21, when Younis failed to hold on to a chance at slip off spinner Azhar Ali. Unfazed, Dowrich deposited Zulfiqar out of the park to move into the 30s and then took two back-to-back boundaries off Amir in the first over of a new spell, to cruise into the 40s.

But with the close beckoning, he lost concentration after facing 90 balls and counting five fours and a six, chopping on to Wahab and conceding much of the advantage West Indies had built up in the session.