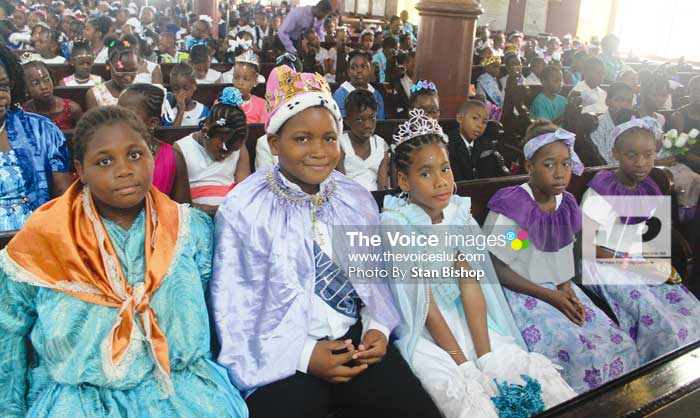 Following that service, the groups participated in the traditional street parade and later assembled at the Dennery Multi-Purpose Centre where cultural presentations were made.

Over the past weekend, activities in observance of the festival were also held. On Friday morning, infant and primary school students gathered at the Minor Basilica of the Immaculate Conception in Castries for a church service.

Following that church service, the students assembled in Derek Walcott Square where they made cultural presentations.

On Friday evening, some la Marguerite groups participated in the gwan séance held at the Dennery Multi-Purpose Court. Scores of followers joined in singing, dancing and fund-raising activities ahead of yesterday’s gwanfet.

Many schools also held their own activities yesterday in observance of the festival.
The la Marguerite flower festival pays tribute to Mary Marguerite of Alacocque and is celebrated on October 17 each year.

Some recorded accounts indicate that la Marguerite societies – like that of its rival, la Rose – have existed in the French Antilles for over two centuries although their origins remain uncertain. However, one school of thought suggests that the societies were founded during the early days of slavery and was practiced by the working class.

While many pluses have been attributed to both societies, including the funding of many churches, their extravagance, quarreling and rioting caused the Apostolic Administrator of Port-of-Spain with jurisdiction over Saint Lucia, Monsignor Ethelridge, to excommunicate them both from the church.

Ironically, today’s flower festivals focus heavily on Roman Catholicism, with each feast day beginning with a church service where prayers are made on behalf of the youth, sick and elderly, nation, church and government.