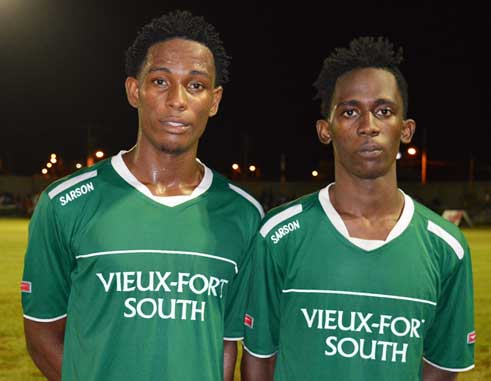 TWO teams which have never won the Blackheart/Saint Lucia Football Association tournament before progressed to this year’s final last Saturday evening. They are Marchand and Vieux Fort South.

In the first semifinal played at Phillip Marcellin Ground, Gros Islet and Marchand locked horns in what was anticipated to be a tactical matchup. The game’s intensity went up a few notches very early when Valdez Maximin opened the scoring for Marchand in the 19th minute with an audacious looping strike from 40 yards out that went past Gros Islet goalkeeper Randy Poleon, sending the massive crowd into a frenzy.

Gros Islet replied almost immediately in the 23rd minute with a goal by Troy Greenidge.

The scoreline remained 1-1 in full and deep into extra time, until the tournament’s leading goal scorer Lincoln Phillip went on a solo run from his own half outrunning the Gros Islet wing to bring home Marchand’s winning goal in the 119th minute, his fourth goal in the tournament.

In the night’s second semifinal, Vieux Fort South came up against Canaries.

After a number of near chances by both teams in front of goal, Delon Henry from Vieux Fort South found the back of the nets, in the 44th minute to end the first half 1-0 to the delight of the VFS fans.

On the resumption, both teams upped the tempo despite a consistent shower midway into the second half as Canaries tried relentlessly for the equalizer. But Vieux Fort South held on and played with more poise and balance going further ahead in the 71st minute with a goal from Antonio Joseph, his second in the tournament to seal the deal and a spot in the final.