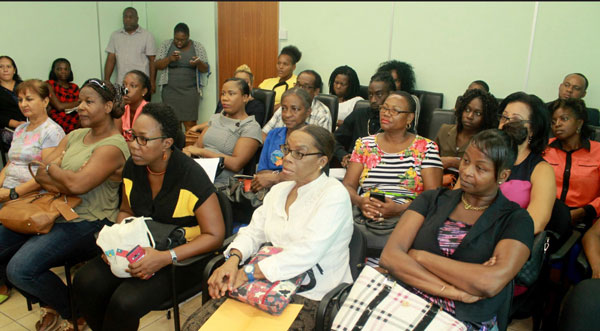 THE Department of Commerce is hoping that this year’s Saint Lucia-Taiwan Partnership Trade Show pays greater dividends than has been realized over the past eight years of the annual event.

On Thursday, nearly two dozen representatives from local businesses attended their first orientation meeting for participants in this year’s trade show at the Department’s conference room.

During that session, participants were briefed on plans being made for the hosting of the event which will be held from November 25-27 at the Johnsons Centre in Rodney Bay.

Cindy Eugene, Marketing Specialist at the Department of Commerce, International Trade, Investment, Enterprise Development and Consumer Affairs, said that while the original objective of the event was to highlight products made in Saint Lucia and Taiwan, that objective later evolved to include services.

She urged the participants to focus on developing lasting business relationships with each other during the event as well as targeting their customers in a way that leaves a lasting impression so as to develop two-way trade between the two countries.

“You must have a target and come with some goal at the event,” Eugene said during her presentation. “Key to us having this partnership is the networking aspect, part of which has been getting Saint Lucian companies to partner with Taiwanese companies.”

While the annual trade show is hosted jointly by Saint Lucian and Taiwanese officials, the lion’s share of the costs incurred to host the event is paid for by the Taiwanese.

Participants pay a $150 fee for their booths during the three-day trade exhibition and many of them welcome the fee, considering they would have to pay much more for the same service at other trade shows.

Since the inaugural trade show was held in 2008, local interest and participation in the event has grown significantly. In fact, the event had to be relocated from Baywalk Mall to a more spacious Johnsons Centre last year due to the increasing number of businesses participating.

Last year, six Taiwanese companies and 54 Saint Lucian companies were featured at the trade show, a record in the event’s history.

Eugene said the trade show is also being held at a strategic time so as to capitalize on the festive season when people are looking for gift items.

“We really want to pitch this (trade show) as a Christmas event on the heels of Christmas so as to encourage people to start doing their Christmas shopping,” Eugene said.

At an information session slated for next Wednesday, new participants will get an opportunity to be apprised on how they can benefit from business-related organizations such as the Saint Lucia Bureau of Standards (SLBS), Small Enterprise Development Unit (SEDU), Trade Export Promotion Agency (TEPA), Invest Saint Lucia (ISL) and St. Lucia Manufacturers Association (SMA).