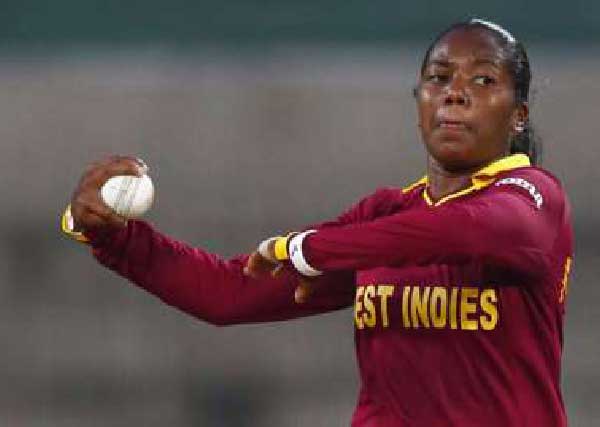 FALMOUTH, Jamaica, CMC – West Indies Women’s captain Stafanie Taylor has praised spinner Afy Fletcher for triggering the batting slide that allowed the regional side to beat England women by 38 runs in the second One Day International on Monday.

England Women were cruising at 107 for four in the 37th over in pursuit of a meagre 149 for victory at the Trelawny Multi-Purpose Complex, when Fletcher and DeandraDottin shared seven wickets to spark a dramatic batting collapse.

Leg-spinner Fletcher started the comeback when she plucked out top-scorer Natalie Sciver for 27 in the 37th over and then trapped Danielle Wyatt lbw for seven in her next over.

“Afy Fletcher actually gave us a chance in the game and overall we did well. Afy has grown a lot,” said Taylor.

“Working with Mr. Ezra Morsely (Assistant Coach) she has really developed and she is one of my go to bowlers. Whenever I am in trouble and I need quick wickets she is the person I can depend on”.

Dottin and Fletcher ensured the visitors lost their last seven wickets for 17 runs in the space of 45 balls and sent them tumbling from the promise at 93 for three.

Earlier, Taylor hit the top score of 56 from 87 balls and was the glue that held her side’s innings together before they were dismissed for 148 from their allotment of 50 overs, after choosing to bat on a hard, slow pitch.

“I was actually looking at something over 200 runs given that we were batting first and it was a good pitch to actually bat on,” said Taylor.

“I don’t think the batters applied themselves and I hope we go back to the drawing board and come good for the other game”.

The result meant that the home team has drawn level 1-1 in the series of five matches, the last three of which will count towards the ICC Women’s Championship.

The Windies Women are currently second in the ICC WC standings on 20 points – 10 behind current ODI World champions Australia Women – and one ahead of England Women.

The teams now relocate to Kingston for the final three matches of the series, starting tomorrow at Sabina Park.

“We want to win all the games..that’s the aim … that’s what we are working towards. We and England are pretty much close, we know it’s not going to be easy. It’s a challenging one but I definitely think that if we work hard we will definitely get some points,” said Taylor.

“I think we need our two components to go out there and fight for it. We definitely have to bat and bat properly and bowl and bowl good”.