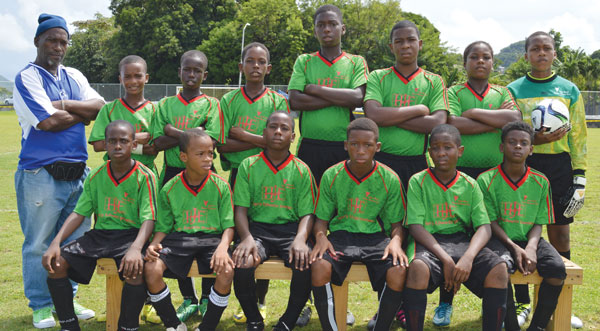 OVER ONE hundred aspiring under – 11 and 14 footballers enjoyed a weekend of football and fun at the inaugural VSADC Capri Sun Football Festival held at the SAB playing facility last Saturday and Sunday.

It was not all sun though the weekend, though, as early morning showers in the north of the island on Saturday resulted in a delayed start of the festival. However, once the weather cleared up the eight participating teams all lined up for the opening march pastled by the Capri Sun mascot before action kicked off on the field.

The teams competed in two group single round robin format. The top two teams from each of the groups qualified for the semifinals which took place on Sunday.

In the under 11 final, Big Players won an epic penalty shootout over VSADC after the game was tied at 1 – 1 at the end of regulation time. The young VSADC footballers had no less than four chances to seal the victory but were unable to score the winning penalty. Big Players eventually converted the final penalty and earned the distinction of being the inaugural VSADC Capri Sun Youth Football Festival Under – 11 champions. In the 3rd place playoff, Flow Lancers FC won a coin toss over GMC United after the penalty shootout was tied after sudden death.

At the prize giving ceremony, Massy Stores Marketing Manager, Sancha Raggie, expressed her satisfaction with the success of the festival and committed that Capri Sun would support the festival in 2017 as the festival was perfectly aligned to the brand message of Capri Sun juices: “naturally fun”.