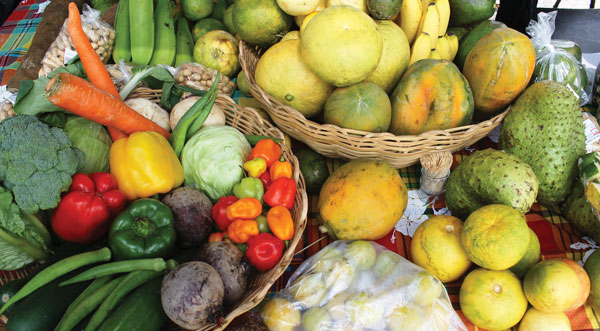 Share this post
IT’S very difficult financing all the necessary ingredients to cook a wholesome, nutritious and tasty bouillon these days. Ironically, ground provision prices are so sky-high that one cannot help but wonder whether these starch-rich edibles are actually grown on the moon or some distant star where money is easy to come by.

Let’s face it: increasing food prices are on a mission to leave us hungry and broke. Gone are the days when you could have just waltzed into Castries Market and bought a $5 portion of yams or dasheen. You could have even gotten a dollar’s worth of green figs to go with that $5 per pound of saltfish. But telling someone these days that you’re having green figs and saltfish for lunch is analogous to betraying yourself. On days like these, it’s best to eat in private.

As funny as it might sound to some, food security is a serious issue. So much so that even the current government included the subject in its last party manifesto. According to the party, strengthening the agricultural sector so as to meet local demand for food consumption, as well as developing the fishing sub-sector through new technologies and best practices, are just some of the means towards making food more available and affordable.

But one of the major hurdles for decades has been making farming attractive to young people. With education becoming more available, many young people have resorted to depending on white collar jobs to earn a living despite such jobs being in short supply. Farming, many will tell you, is a waste of time and demands too much. A quick buck seems more attractive than even planting short-term crops.

One would have thought that with unemployment being as high as 48% among young people that more from that demographic would be encouraged to get into farming. But it seems clear that only a handful of young people whose families do have arable land have taken up the challenge. Unfortunately, the others prefer to point a finger at others who they think should be providing jobs rather than developing green thumbs themselves.

Some years ago, the Taiwanese government made a valiant effort to teach especially young people here the various aspects of agriculture, fish culture and so on. Even went as far as cultivating an orchid station at Union whereby some of the flowers were sold to local hotels.

After a successful run, that programme – like the agriculture and fish production programmes – lost momentum due to many of the youngsters losing interest. After millions of dollars would have been pumped into projects that aimed at feeding us, the failure to recognize that feeding ourselves by producing our own food is not so attractive.

With the abundance of cheaper, imported processed foods now filling our pantry shelves, eating fresh and organic foods has become a challenge for many. But there are times when certain local produce are cheaper than usual, especially when the supply exceeds demand. For example, you’re lucky if you get three ripe plantains for $2 on any given day. On other days, however, you get as many as six for the same price.

But make no mistake about it: $5 cannot block any hole these days, as was proclaimed by a former government minister. Not even a hole in a pocket far less a hungry belly. As fate would have it, leaving our agricultural sector undermanned has resulted in us being underfed, undernourished and paying too much to get rid of hunger.

My advice to the new government would be to make available arable land the Crown owns to especially young entrepreneurs/farmers to cultivate cash crops. Such land can either be leased or sold for such purpose. In fact, we should not engage in simply selling away our limited land resources solely for touristic development. Tourists coming here have to eat, don’t they?

Some years ago, Guyana introduced a land programme whereby agricultural land was being sold for next to nothing to CARICOM. Two obvious aims of that programme was to restore Guyana’s role of being the ‘Caribbean’s breadbasket’ and reduce unemployment in the region. However, with Guyana having much of 83,000 square miles to play around with compared to Saint Lucia’s 238 square miles, any programme of that sort should be implemented solely for Saint Lucians and for a specific purpose.

With Saint Lucia’s food import bill running into millions of dollars, a more aggressive approach needs to be adopted in the agricultural sector, one not limited to the banana industry. Equally important, our aging farmers who have fed us well for decades could really use some technical and tangible support.

When he addressed the inaugural Council of Agriculture Ministers Meeting held in Jamaica in April last year, OECS Director-General, Dr. Didacus Jules, zeroed in on one of the fundamental problems affecting the region: food security.

In 2011, the total food important bill for the OECS region stood at US$473 million, accounting for close to 20% of total import of goods into the region. Understandably, Saint Lucia’s price tag would be a sizeable ratio of that total.

“The disturbing reality is that we have become net food importing countries with some countries importing as high as 95% of their food in 2011 with the lowest (rate of) importation in the OECS standing at an unacceptable 55%,” Dr. Jules said.

He posited that the region should set a goal of halving its food import bill within three years so as to “set the stage for making a fundamental impact in reducing poverty and positioning our farmers and agri-entrepreneurs to start penetrating export markets.”

For a nation where green figs and saltfish is boasted as being the national dish, it is passing strange that many people cannot even afford to eat that dish at will. Saltfish has to be imported and with the woes being faced by the banana industry green gold now costs a diamond. Soon, it might be made official that chicken backs and rice is the national dish. Too farfetched, you say?

Inasmuch as kudos must go to those hardworking farmers – especially those form the rural communities – more needs to be done to get those on whom we should be relying to feed us to literally till the soil. If we cannot feed ourselves wholesomely, the doctors will continue to make a killing – metaphorically, of course – writing out prescriptions for us to treat non-communicable diseases we could have prevented had we eaten what we should have been growing.

With World Food Day about a month away, it’s time we start doing what we say and not limiting food security to policies on paper only. We need to be proactive. I mean, are we really independent when we cannot even do something as basic as feeding ourselves?