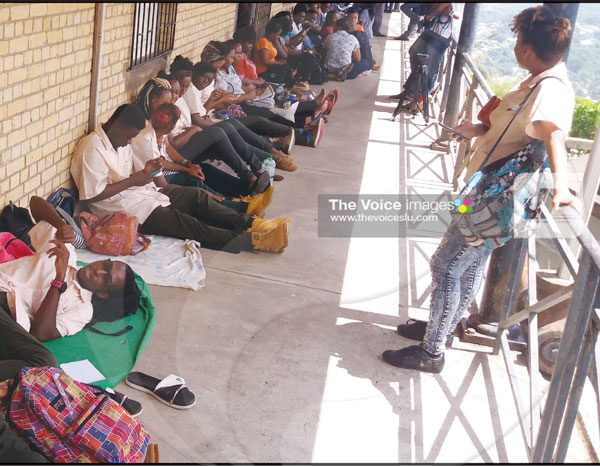 A group of over 60 students of the Sir Arthur Lewis Community College has come together to take a peaceful yet powerful stance, or seat rather against the ongoing issues plaguing the College campus namely mould infestation and an unsatisfactory and non conducive choice of temporary relocation.

In a solemn display of solidarity, the students gathered on Friday morning from 9:00 a.m. and sat quietly outside the office of the school’s principal, Olivia Saunders, demonstrating that this inconvenience was a better option for them as opposed to the designated classrooms of the George Charles Secondary School in nearby Cul de Sac.

The group that kept on growing in numbers as the day progressed included mostly year one students, both part time and full time of the Nursing Department, Bachelor’s in Education course, Division of Teacher Education and Educational Administration and the Agriculture Department.

The students said they are tired and frustrated of the conditions that they are forced to stay in whilst preparing for their examinations in December.

According to the disgruntled students, they have been attending classes held at the George Charles Secondary School for the past three weeks and whilst they know that the settings are only temporary, they are seeing no end in sight to the situation.

One vocal student told The VOICE: “I am not very impressed with the turnout (of protesters) but then again that’s an issue where a lot of St. Lucians don’t know how to speak out for their rights. A lot of St. Lucians are afraid to speak and they feel like they should only mumble silently amongst themselves, and that’s an attitude we have to break in society. Given that, the numbers are ok. I would have been happier if more persons came out because if there is change, they willall benefit. All the persons who are not here and are taking this as a day off, they will benefit as well…my thing is that, I don’t think we can change the slave mentality that we are trying to break, but I mean, it is what it is.”

The student, who opted to remain anonymous, said amidst all the discomfort and frustration, she can’t help but feel bad for the actual students of the GCSS as she said the school’s conditions were cleaned up and modified to suit its guests; however, with the conditions still as bad as they are now, she can only imagine how torturous the prior conditions must have been for the youngsters attempting to acquire an education there.

She said: “How did they function? How did the staff get to teach? It couldn’t have been a situation where these things are happening now. It must have been ongoing and it makes me realise that maybe this sort of protest action should have been done earlier by the teachers of the GCSS” 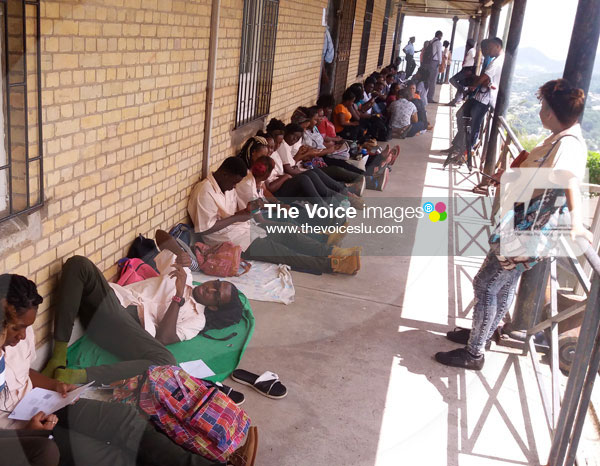 Pointing out the myriad of issues plaguing the GCSS guests, the student said: “We have a situation where there is one bathroom per building, the structure of the building and the emergency plan is not safe and if there was a fire or an emergency at that school, a lot of people would die. There are two doors in a class and one door has burglar bars built into the ground so if there is an emergency, we would all try to bolt out through one door and you could well imagine how that could play out. And what’s worse is that at least we are adults, but you are looking at the situation that children face.”

She continued: “We have a bus situation where the drivers are complaining that we have private vehicles dropping and picking us up; however, if there are less than three persons on the bus, they refuse to drop us at the school at any time of the day, and this is ongoing. Coming from the school, our classes end at 5:00 p.m. and 6:00 p.m. and we have to walk in groups. Some people have their private vehicles but not all of us do and we don’t have buses coming in there.”

Other gripes felt by the students include the lack of facilities including libraries, a reprographic centre, no internet service and no study area. This, they said ,comes despite the fact that they paid their facilities fees so that they could have access to all the things they are missing now.
The student said she along with her peers recognises that the school’s Dean has been working arduously to get the situation remedied

“We see him trying but we know that he’s not the only person who’s responsible and I’m sure he’s working because we see him. We see him stressing but it’s something that needs to take precedence in the office and that’s why we are here today.”

Students say the Dean has made himself available for discourse and they have also held numerous student/teacher meetings. However there has been no real progress or change, especially with the dates for their end of year exams looming in rapidly.

The VOICE also spoke to the school’s principal Ms. Saunders who expressed a genuine level of understanding for the students’ plight.

On the other hand, she said that the students don’t fully understand just how much effort and resources that the school is putting into easing the many burdens they are complaining about.

Saunders said SALCC has targeted the issues at the GCSS head on and although the school is still in a poor state due to the fact that unforeseen issues prevented them from commencing their works earlier, it is far better than what it was before they made any modifications.

The principal said the college has undertaken numerous tasks to better the situation including buying and installing 50 fans and air conditioning units to battle the intense heat as well as removing some of the burglar bars mentioned earlier.

Walking The VOICE over to show physical evidence of their works, Saunders pointed out a moving truck filled with supplies and equipment for the Simulation Lab for use by students of the nursing course which was in the process of being transported to the GCSS.

Saunders agreed that the situation of mould should have been addressed sooner to prevent it from reaching to the present stage, but said it was now a unanimous decision to use this bad patch as a learning process.

Saunders said: “There are situations beyond our control. But now, even up to last night, we were painting floors, getting rooms clean etc. So like I said, I totally understand their discomfort but it’s not like we’re sitting down biting our nails. We are addressing the issues. It’s cost us well over $100,000 already to try to put GCSS in order in terms of the washing, cleaning and air conditioning unit. And we still have to spend more because now we have to expand the Wifi.”

She said the bus situation is also of great concern and she has since contacted the bus association to remind them of their agreement with the college which they have unscrupulously broken.