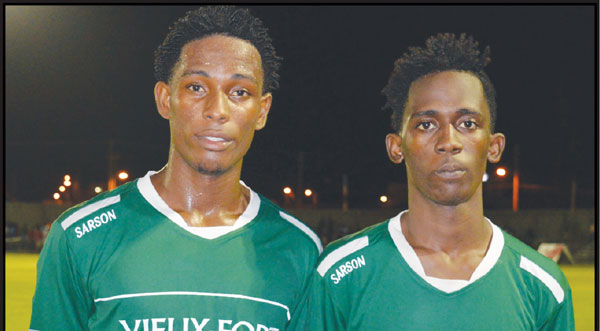 THE Soufriere Mini Stadium will come alive this weekend for the final set of preliminary matches and the start of the quarterfinal action in the Blackheart / St. Lucia Football Association’s Knockout Tournament.

From 6:00 p.m. today, the National Under – 20 team will play defending champions, Micoud, while at 8:00 p.m. home team Soufriere come up against Gros Islet.

Tomorrow evening, the tournament shifts into high gear with the commencement of quarter final action from 6:00 p.m. as La Clery play Marchand, while at 8:00 p.m. Central Castries meet Canaries.

Meanwhile, on Wednesday, Marchand and Vieux Fort South advanced to the next round of the competition following matches held at Phillip Marcellin Grounds in Vieux Fort.

In the night’s first encounter, Marchand had the better of Vieux Fort North with a 3 – 1 win. At the end of the first half the scoreline remained nil all on a surface on which the grass had to be properly mowed and in certain areas sand had to be brought in to level out some areas.

On the resumption, both teams upped the tempo a few notches to the delight of the fans. Percius Narcisse opened the scoring for Marchand in the 54th minute. Vieux Fort North, with national player Sheldon Emmanuel in its lineup, never gave up as they continued to search for the equalizer. They did not have to wait too long though, as Haig Flavius made it 1 – 1 in the 63rd minute to a thundery uproar from the supporters in the stands.

It was game on from there as Marchand went on to score two more goals from the boots of striker Lincoln Phillip in the 78th and 85th minutes to seal the victory.

After the game, coach of the Marchand team, Desmond Sydney, spoke to The VOICE about his team’s victory.

“With the scoreline nil all at the half, Marchand’s problem was getting chances and not putting them away. it’s not about the fancy play and the dribbling in front of goal; it’s about making nothing a chance and getting it at the back of the net. We scored first, and then 9 minutes later Vieux Fort North came back and equalized. I was very disappointed, because we lapsed in defence, but we kept our heads up and stuck to our game plan.”

The VOICE: For the past two consecutive years, Marchand appear to be having a good run on the local scene: Super League, Northern Zone and now Blackheart. What’s the secret?

Desmond Sydney: To be honest, we always have a good run. Once we get good officiating, our game will be on a high and rest assured there will no team to beat us. In this encounter, I was satisfied with the level of officiating and also elated with the victory and, so too, the players and the rest of the technical staff.

In game two, after being booted out last year in their first encounter, it was sweet revenge for Vieux Fort South as they easily went past Castries South 4 – 1 in front of their home fans without the services of Under – 20 national players Noah Nicholas and Nyron Winter.

Vieux Fort South striker Antonio Joseph opened the scoring in the 12th minute of play to the delight of their supporters despite Castries South’s several attempts to equalize before the halftime whistle.

On the resumption, it was an all-out attack from VFS. Jervic Mc Farlane made it 2 – 0 in the 62nd minutes, while two quick strikes from Antonio Joseph in the 90th and 92nd minutes made it 4 – 0.

Antonio in the process became the first player to score a hat trick in this year’s tournament. It was also his best performance to date in VFS colours.