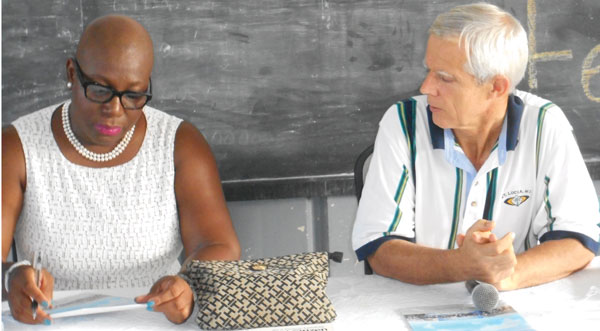 RESIDENTS of Micoud were urged to focus on the true meaning of violence and not to accept it as the norm.

The advice came from Dr. Gale Rigobert, Minister of Education, while addressing residents on the topic “Peace” at an event to commemorate Peace Road, which was held at the Micoud Secondary School.

The theme of Peace Road this year, which was organized by the Universal Peace Federation, in conjunction with the Minister, was

“Connecting the world through peace”. The event is held every year in 140 countries around the world.

Dr. Rigobert, who is also the district representative of Micoud North lamented “that too often we limit our understanding of violence as physical.

Dr. Rigobert urged everyone to speak out against violence in every form, adding that it should not be seen as a way of life.

“Sometimes through our silence we encourage wrongdoings and violence,” she said.

According to the minister, we live in world riddled with violence in a myriad of forms. She said such a situation “needs urgent attention and we should all play a part in dealing with it.

“Countries wage war against each other…Even here in St. Lucia we read the news and hear of the most gruesome forms of violence, whether it be murder, domestic abuse or sexual assault,” she said.

Dr. Rigobert added: “I am afraid that we have become so accustomed to the news of violence that as a people we have become numb to (it). Some people see it as a fact of life…”

The minister said St Lucians must never be satisfied with any form of violence and it must be seen as unacceptable and unnerving.

In an interview with The VOICE, the Secretary General of the Universal Peace Federation, Remy Taupiere, who is based here said: “Peace starts at home. Peace is everyone‘s business because violence affects everyone…”

Taupiere said, “we also need to take note of the conflict which exists among countries around the world because it can affect us in one way or the other”. He drew reference to the conflict between North and South Korea, stressing that there is an urgent need for peace between those two countries. He said North Korea is building a strong army and deadly weapons, adding that they are being supported by Russia and China.

He said the United Nations (UN) has intervened but to no avail.

“Since the UN is not able to stop or prevent the war we need to reconcile and overcome our differences,” Taupiere said.

He said St. Lucia will be given international exposure by commemorating the Peace Road. Last year Peace Road was held in Anse la Raye.