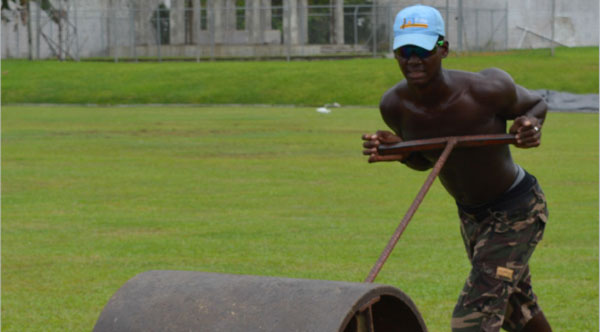 THIS past weekend a bespectacled 21-year-old left arm fast bowler Dillan John who cricket pundits believed couldn’t quite grab the ball turned accuracy into an art form at the Mindoo Phillip Park with some hostile bowling.

Bowling for Central Castries, John, who made the St. Lucia senior cricket team as a reserve player this year, finished with a career best of 6 wickets for 16 runs.

His cricketing career on the local scene spans a little over six years. He started playing and suddenly left the game for a while after feeling demotivated but has since returned to the sport.

John did not play any school cricket as would other players, because he left school while in Form 4. He plays for Central Castries at the district level and South Castries at the club level.

John caught The VOICE’s attention in February during the final of the Prime Minister’s T20 final that was played at the La Ressource Playing Field where he picked up 4 wickets for 18 runs in his allotted four overs against South Castries.

At the weekend during the deluge at the MPP, The VOICE spoke with John about his cricketing exploits.

The VOICE: How did it all start for you? John: It’s a while now I have being watching the South African right arm fast bowler Dale Steyn who only recently reclaimed the No. 1 spot in the ICC Test bowlers rankings after picking up match figures of 8 for 99 in South Africa’s 204 run win over New Zealand. “I love his bowling action; he is a hard worker with the new ball as he swings the ball both ways. Presently, I am working on that aspect of my cricket, too. I want to be better than him, feared by batsmen.”

The VOICE: Your plans for the remainder of 2016 and beyond?
John: I am not sure what’s next on the local scene, but my goal is to make the Saint Lucia team, then onto the Windward Islands and West Indies. I am 21 years old, so I am taking it one match at a time.

The VOICE: In terms of your cricketing development, who have assisted you along the way?
John: Cricketer Malcolm Monrose helped me out. Other assistance came from West Indies legend Sir Andy Roberts; he helped me out in the nets while on island with the St. Lucia Zouks. I must give kudos to him because he really worked hard with me. I want to thank him publicly for sharing his experience and guiding me along.

The VOICE: Before the start of the day’s play I realized you were involved in the pitch preparation. Tell me a little more about that.
John: I really love the game and want to get as close to it as possible. So I took on the responsibility of preparing the wicket at the Mindoo Phillip Park. West Indies/Daren Sammy Cricket Ground curator, Ken Crafton, gave me a few tips and I am implementing them.

The VOICE: Would pitch preparation and field maintenance be a career/profession you wish to pursue?
John: Not sure yet. It’s like being between a hard rock and a hard place. But for now, I am focusing on my future in the game.

The VOICE: What do you do during your spare time?
Dillan: Train hard. When I am done, it’s home time. I am not a going out type of individual, but I do socialize with close friends.

The VOICE: As a young aspiring cricketer, what advice do you have for your peers?
John: Work hard and play hard; don’t allow anybody to bring you down. There are many distractions and obstacles, so stay focussed on the job and the successes will come.