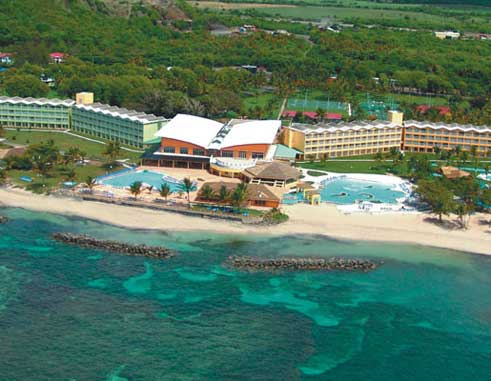 LAST Tuesday’s weekly Managers’ Cocktail served as the backdrop for yet another cheque donation by Coconut Bay Beach Resort & Spa which continues to contribute to the restoration of St Jude Hospital.

During last week’s Manager’s Cocktail, the resort handed over another $10,000 to the reconstruction effort.

Hallberg, in remarks during the ceremony noted that Coconut Bay was fully invested in the community, with the responsibility of being the largest employer in the south of the island.

He said: “ We are proud to be both a good neighbour and a corporate supporter of St. Jude Hospital’s restoration efforts and are gratified to see these donations at work, having a positive impact particularly on Saint Lucia’s children, as well as many of our staff members and their families who receive health care from St. Jude Hospital.”

In its continuing efforts to support the local community, Coconut Bay Beach Resort & Spa has a long-standing relationship with St. Jude’s Hospital — the Peodiatric Ward in particular. Material and monetary donations are generated on the hospital’s behalf through philanthropic activities including the weekly ‘Charity Rubber Duck Race’ at the hotel’s CocoLand Waterpark.

Since the Memorandum of Understanding between the resort and hospital was formalized in 2013, Coconut Bay Beach Resort & Spa, its staff and generous guests have made monetary contributions of over EC $70,000 to St. Jude.