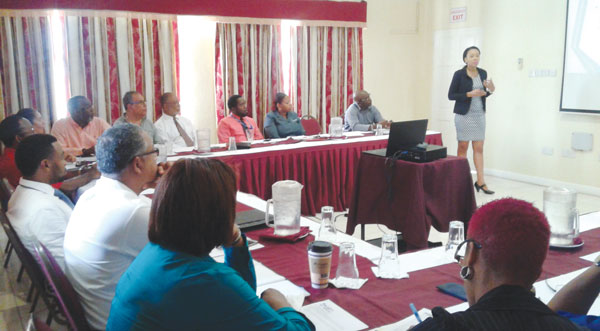 THE St. Lucia Chamber of Commerce Industry and Agriculture met last Thursday with a small group of its members who had indicated concerns with the draft OECS Harmonised Credit Reporting Bill.

The OECS Bill is being developed and promoted by the Eastern Caribbean Central Bank with technical assistance from the World Bank’s International Finance Corporation (the IFC).

The meeting was facilitated by Ms. Sherise King of the Caribbean Credit Bureau Corporation who provided participants with an overview of the Bill, its context, structure and key considerations.

The meeting noted that the ECCB and IFC were recommending specific Credit Bureau legislation for the ECCU. Participants felt that the proposed legislation appeared extremely stringent in many respects compared to that which obtained in other jurisdictions. It was observed that in Trinidad and Tobago and Barbados where credit bureaus have operated successfully since 2004 and 1993 respectively, there was no Credit Bureau legislation, but rather, Data Privacy, Data Protection Laws and Electronic Transaction Laws obtained, which, as the IFC indicated, were acceptable frameworks to provide the legal underpinning for the operation of credit bureaus.

Participants expressed concern that the proposed legislation would lead to reduced access to credit, the exact reverse of what the creation of credit bureaus is intended to foster.

Fears over the negative impact on small and micro business were raised as it was felt that such constraining rules would compound an already restrictive environment where there was already a shortage of finance for business. This could reverberate across the economy causing economic contraction due to a drying up of the critical fuel which credit is.

Moreover the effect of the legislation’s broad and unreasonable definition of “credit information” had the potential to lead to discrimination against the poorer, small and informal sectors.

“The Chamber believes that the public needs to be educated and informed on credit bureaus, their role, their function and impact on the average consumer prior to introduction of wide ranging legislation.” a Chamber statement yesterday said.

It added: “Of grave related concern to the Chamber has been the tendency of government to rush legislation into enactment without proper national consultation with the general public and institutions which will be affected. A case in point was the Banking Act. The Chamber feels that this piece of legislation may have similar impact of negatively affecting consumers, increasing the price of services and reducing choices, events that negatively affect small business ability to access credit and thus economic growth,”

The Chamber said it plans to deepen and widen its discussion on this critical piece of legislation both with its members and the government, as well as its partner private sector organizations.