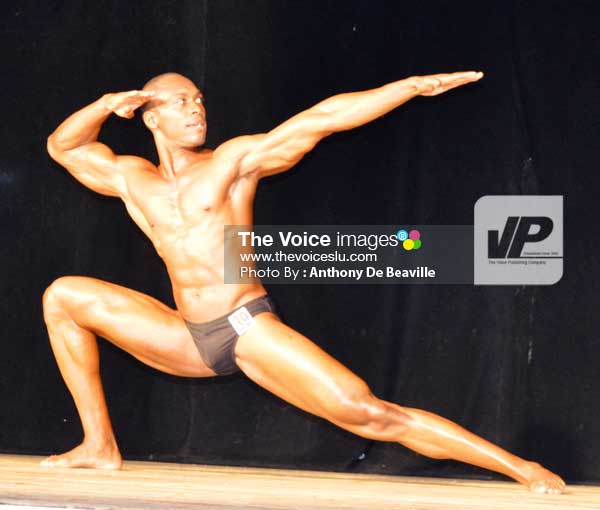 BODYBUILDING and fitness enthusiasts turned out in their usual number for the National Bodybuilding Championships held over the weekend.

A combined 24 male and female athletes in seven categories graced the National Cultural Centre main stage to show their stuff at the event hosted by the St. Lucia Amateur Bodybuilding and Fitness Association.

The men’s physique short class can best be described as the hottest category contested on the night’s card, with four registrants. Denver Williams with a well chiseled physique, emerged winner ahead of his rivals Jabarie Bret (South Side Gym, 2nd) Peter Prospere, 3rd and Lance Etienne, 4th (both representing Alidies).

In the men’s Physique Tall, class it was a blinder as a section of the crowd went wild at the introductory stage for Zimran Leon of Mango Moon. But it remains unclear whether the crowd support was part of the judging criteria or the consistent cheering on for Leon would have persuaded the judges decision as Leon eventually won the competition ahead of Mervin King – Vel’s Fitness Centre – 2nd, Miller Charles Fitness Freaks, 3rd) and Dyllan Boulogne, 4th.

In the Novice category where young and aspiring talent is supposed to come to the fore, only two athletes braved the stage, Simeon Mathurin representing Mango Moon and Joneil Pelage of Laborde’s Gym. The eventual winner was Mathurin.

The intermediate class also had two competitors,Kurton Hubert of Laborde’s Gym was good enough on the night to please the judges as he defeated Newton Alberton for the top spot.

In the final round of competition, the champion of champions clash between Kurton Hubert (intermediate) and Orville James (seniors), the latter proved too much for Hubert he captured his second title on the night.

Guest poser, Desmond Patterson was in terrific form as he thrilled the audience with his compulsory poses.