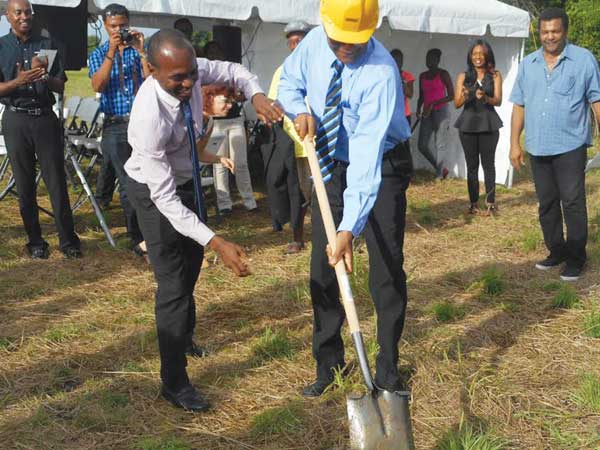 Construction To Start within Next Few Months.

A US $ 6 million tourism project is soon to be commenced at Anse Tou Lou Beach at Balenbouche, Choiseul.

The project, Domain Balembouche, which will be undertaken by Berechit Ltd. has already been given DCA approval, and is expected to commence in a few months time. It will comprise 20 luxury villas with 34 rooms.

A sod turning ceremony at the picturesque site was held last Thursday. Among those who attended, were the investors of Berechit and government officials including Bradley Felix, Minister in the Office of the Prime Minister with responsibility for Commerce, Industry, Investment, Enterprise Development and Consumer Affairs and Dominic Fedee, Minister of Tourism.

In addressing the ceremony, director of Berechit Ltd, Jean Claude Elbez said the investors of the company were inveterate travellers who for over 14 years had experienced first hand what was done in the tourism industry all around the world, adding that it has given them a chance to observe how the concept of tourism had evolved over the years. He said it was during one of those trips that they fell in love with St. Lucia.

“Our goal is to sell 20 Creole style family cottages, one, two or three bedrooms with swimming pools and fully furnished. Those touristic rental properties will give new investors a very good return on their investment. Those cottages will not be built to become second homes that remain empty…, but homes that will be occupied for the majority of the year,” Elbez said.

He said the company has such an investment in France and it has been successful.

Elbez said he expects such an investment to also be successful in St. Lucia.

He said it is their hope that this new touristic habitat appeals to the local population to create anything they can imagine or invent. “It is not an all inclusive…” he said.

Elbez said the investment will further encourage local culture rather than discourage it as in other hotels on the island, adding that the old cliché that asserts that tourism would spoil local culture has proven wrong in many parts of the world.

“The people who will rent those houses will certainly walk in communities such as Laborie and Choiseul to meet local people and understand their way of life. They will buy bread, vegetables, take a boat ride…,” he said.

He added: “Last month we were in Yucatan, the south of Mexico and Guatemala where we witnessed the revival of Maya culture.”

According to Elbez, while luxury tourism has its place and relevance, tourism is growing and requires a new form of investment, and investors who will respond to the needs of the influx of tourists from the middle class.

Felix, who is also the district representative for Choiseul said: “When my government came into office, we did promise increase investment and to reduce unemployment…and with projects like this we are well on our way to deliver what we promised.”

The plan for the project and was very impressed by it. Fedee, who described the occasion as a “history making moment” said this development is part of a series of developments that are taking place in the south.

“Since the establishment of the Hewanorra International Airport we are finally beginning to see the true potential of the south. I can’t wait to see the development completed along with others that are coming on stream,” Fedee said.
“Finally, the people in the south will have their opportunity to have their claim of a stake in the tourism pie,” he added.