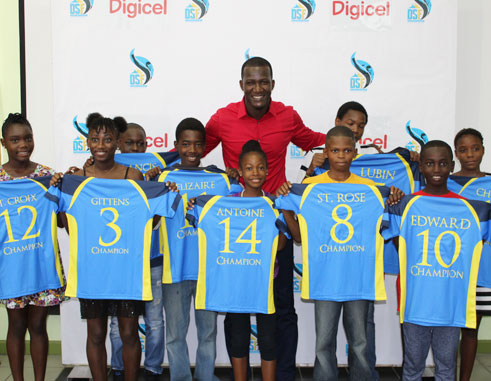 DAREN Sammy, arguably St. Lucia’s best loved son, has called on young people to use their brain for the good of themselves and the country, as it is the most powerful tool at their disposal in the pursuit of their dreams.

“We all may not have a skill but we have a brain. Once we use that brain well enough we can achieve things. The most powerful tool that we have is this brain of ours,” Sammy said.

Sammy was at the time speaking to 10 recipients of grants from the Daren Sammy Foundation (DSF), the first group to attain that distinction less than a month after its launch.

“Today is a very special day for the Daren Sammy Foundation,” Sammy said yesterday at a small ceremony at the Cultural Development Foundation at Barnard Hill to mark the historic moment for his foundation.

The two-time world-winning captain of Twenty/20 cricket and former captain of the West Indies Cricket Team humbly shared with the first time recipients of the Foundation his story of passion and affection for sports, especially cricket and how it has developed and inspired him to be the man he is today.

“I encourage all of you to work hard, be disciplined, do not let anyone stop you; the sky is always the limit, believe in yourself,” Sammy said to the youth who will be attending secondary and primary schools.

Loved and respected across the cricketing world for his discipline and leadership on and off the cricketing pitch, Sammy, who hails from Dugard, Micoud has spoken much about giving back to his country through an avenue targeting the youth.

His foundation, which was launched in grand style a few weeks ago, is the perfect conduit towards achieving his dream of giving back, he said.

“It gives me great joy to give back to a country that has supported me. We start this journey to develop the future champions of St. Lucia…It is a long-time goal of mine,” Sammy said.

He added: “This foundation, with the vision I have, could take St. Lucian athletes and students a step closer to their dreams”.

Sammy’s journey from his boyhood days in Dugard, Micoud with a passion for cricket to becoming the captain of the renowned West Indies Cricket Team and winning the hearts of millions of spectators of the sport the world over is one that could be an inspiration to St. Lucia’s young who, too, have a dream, a passion, which they hope could lead them to success.

They, too, could adopt two of Sammy’s favourite inspirational quotes, which he said have kept him focused which are: “What the mind can conceive and the heart can believe, the body will achieve” and “Success is knowing your purpose in life, growing to reach your maximum potential and sowing seeds that benefit others.”

Sammy called on the recipients of the five- year grants to “go out there and make St. Lucia better”.

“All I am asking for are good grades, steady improvement, good attitudes; be disciplined,” Sammy told his charges.

He encouraged their parents to be a part of their lives and have them believe that they can be anything that they want to be.

According to Sammy, he wants his foundation to be different to the other foundations in the country.

“The Daren Sammy Foundation is about making a difference. We have a lot of foundations in St. Lucia that help out, but for me (DSF) I want it to be different,” Sammy said.