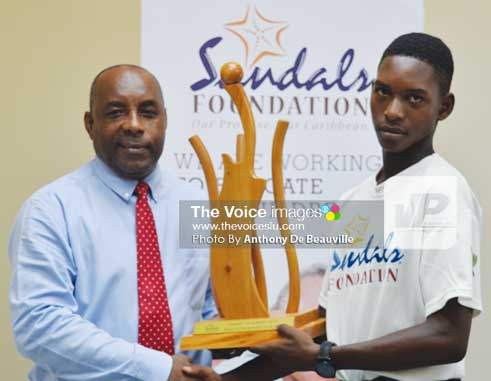 NATIONAL Under -15 cricketer Lee Solomon was all smiles when the announcement was made at the closing ceremony of the annual Sandals Cricket Academy on Monday afternoon at the Daren Sammy Cricket Ground – that he had indeed won the Most Outstanding Player award.

Solomon was presented with his award by former England Test cricketer Roland Butcher, who, is currently head of sport at the University of the West Indies Cave Hill in Barbados.

Lee has represented St. Lucia at the under 15 level in the Windward Islands Tournament; St. Lucia are currently double champions winning back to back tournaments in 2015 and 2016.

The highlight of the closing ceremony saw Butcher addressing the young players, whom he urged to follow their dreams. Butcher was born, in Barbados and became the first black player to be selected on an England Test team. He encouraged the young men to make the best of the opportunities in sports that lay before them, adding that success is built on a foundation of discipline and hard work.

“Don’t be put off by persons who tell you that you can’t do something. If you have the belief in yourself, then you can achieve your goals,” Mr. Butcher charged.

He commended the Sandals Foundation for their 14-year-long investment made in the development of grassroots cricket in St. Lucia. He pointed out that the role of caring corporate sponsors in nurturing young talent should not be underestimated.

Veteran sports commentator, Joseph ‘Reds’ Perreira, also lauded the initiative and urged the young men to make the best of what they have been exposed to over the course of the camp, including not just on the field of training, but also life lessons, and public speaking.

Perreira said: “If you go for a catch and you know you did not take the catch, then do the right thing and admit that you didn’t. Let that begin now. Honesty and truthfulness are as important to your conduct as a cricketer as the technical skills you learn on the field.”

Sandals Regency La Toc General Manager, Michael James, spoke of the importance of the choices people make in life and congratulated both the young players and their parents for the choice they made to participate in the camp, and to walk a positive path.

This is the 14th year the Cricket Academy has been put on by the Sandals and the Sandals Foundation in association with the Government of St. Lucia.

Speaking on behalf of the players, young Dominic Auguste thanked the Sandals Foundation as well as the Ministry of Sports for investing in them through this initiative. He assured that the 33 participants will seek to make the best of the opportunity even after the camp has concluded.

Congratulations also went to national and Leeward Islands coach Alton Crafton, who led the camp over the past eight days. Crafton has been instrumental in the execution of the annual camp for several years.

Several managers from Sandals later traded in their official outfits for cricket gear, as they closed off the Cricket Academy with a fun match at the Daren Sammy Cricket Ground, playing alongside the young men who participated in the camp.