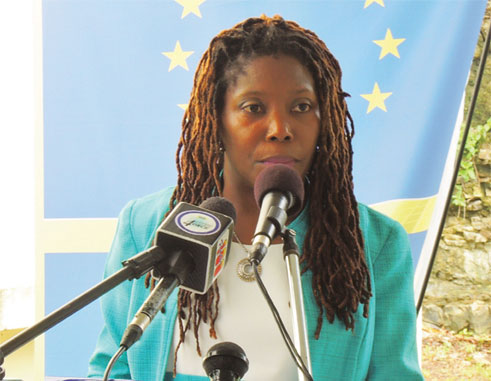 ST. LUCIA has achieved full commitment of resources allocated to it by the European Union (EU) under its Agricultural Transformation Programme of the Banana Accompanying Measures – ATP-BAM, in the assigned time of three years. A further two years was allocated to complete implementation of all projects.

St. Lucia’s National Authorizing Officer, Tracy Poluis, made the disclosure while addressing the Sod Turning Ceremony for the National Diagnostic Facility at Union on June 29. Speaking on behalf of the Delegation of the European Union to the Eastern Caribbean, Polius said the Delegation was particularly impressed with the excellent effort made by St. Lucia, in this significant achievement.

Polius described the achievement as “the triumphant culmination of years of engagement with the European Union by the Office of the National Authorizing Officer and the Government of St. Lucia.”

She said it was an example of stellar cooperation between the Office of the NAO and the implementing partners, namely, the Ministry of Agriculture and the Banana Industry Trust (BIT). Polius said the successful implementation of key components of the ATP-BAM Programme was evidence of the strong commitment of public sector employees, demonstrated through “the exercise of strategy, patience and long arduous labour.”

According to Polius, a strong cooperative relationship developed, between the Green Economy Team at the EU Delegation in Barbados and the Office of the NAO in St. Lucia. She said there was constant engagement at the technical level as well as at the level of the NAO, to ensure that problems were resolved quickly. Polius said it was this partnership that had yielded the 100 percent commitment of resources allocated for St. Lucia’s ATP-BAM Programme. She was confident that this spirit of cooperation would ensure successful implementation of the BAM Programme in St. Lucia.

The Delegation of the European Union to the Eastern Caribbean Countries, OECS, CARICOM/CARIFORUM says it is thankful to St. Lucia for the efforts towards what has been achieved so far, and was looking forward to working with stakeholders on the island, to complete projects under the ATP-BAM.

Polius said the Delegation is committed to working with St. Lucia and other donors, in implementing reforms and policy guidelines that would further transform the island’s agriculture sector.

These countries are Belize, Cameroon, Côte d’Ivoire (Ivory Coast), Dominica, Dominican Republic, Ghana, Jamaica, Saint Lucia, St. Vincent and the Grenadines, and Suriname. The measures were identified and prepared by each ACP country in coordination with the EU, within wider agriculture and development strategies. St. Lucia’s Ministry of Agriculture, along with the Ministry of Economic Development and other stakeholders – were the architects of the island’s BAM Programme, with several projects designed to achieve transformation of the agriculture sector.

The total financial allocation for all ten beneficiary countries was €190 million, with Saint Lucia being allocated €10.3 million. These projects range from capacity building efforts for farmers and agro-processors, to constructing and equipping of a National Diagnostic Facility, refurbishing, retrofitting and equipping of four agro-processing facilities, procuring inputs for the management of Black Sigatoka disease in bananas and plantain, and the procurement of land preparation equipment to assist farmers.