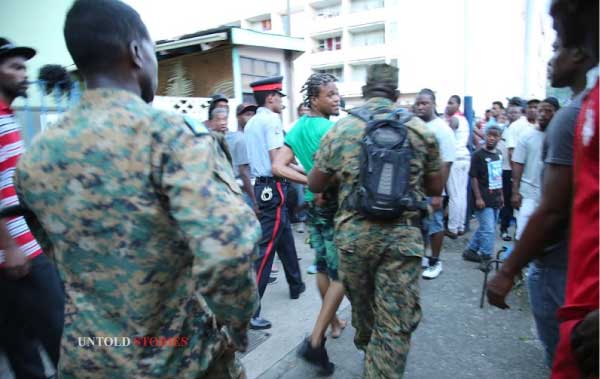 From an ounce after midnight I marco-ed the clock watching the second hand move closer to my favourite part of the carnival season: j’ouvert. I expected the lazy start, but the city was crawling with gabs and outfits of all shapes and plus sizes. The early morning stench of Castries drains was replaced with the sizzle of fried chicken and the lady with the curlers in her hair ensured the floats were brown on both sides.

Then like a mythical rainbow, the residue of Skittles’ Band paint lingered in the Castries air. Between Litche and the Shabin who was in a total musical trance, I was mystified. My mother would have been proud, my waist, my lower back and hands matched every beat as the pretty 30 something posed in front of me to offer the best of St Lucian Carnival. This was turning out to be an awesome 5:48 a.m. Between the thickening crowd and just over the sound of our truck came the Kairi FM monster with more speakers, more beautiful St Lucian ladies, stilt walkers, a line of foreigners in tow, hands in the air and eclectic motion, but then it happened.

The scramble, the immediate dispersal of the crowd, the bottles which rained at the intersection of John Compton Highway and Jeremie Street, the mixture of superlatives and the sound of sirens meant someone would be in the calaboose for the rest of “de carnival.” The hush which replaced the music revealed one woman was bleeding profusely apparently from a stab wound. As her blood drained slowly into a Castries gutter, the music on the truck erupted again and like clockwork waists moved in pendulum formation. And then running, police shouting, crowd parting, the national word of St Lucia, shiny farming tools magically appeared and again the streets ran red with a mixture of the revelry paint and the blood of yet another carnival casualty.

My zeal, the Shabin who was showing me a good time and the desire to be part of this j’ouvert vanished all at once. In the aftermath, my journalist sense returned. I could identify one senior police officer, seven men dressed in camouflage and about three other uniformed officers. With a great deal of haste and seemingly under orders they rushed to the trucks to order the music off and to officially inform the bands that de party done. Like most other people I thought this was a temporary measure, but as the procession thinned out and the trucks disappeared, the vibe in the city took on a morbid aura.

In my peanut size brain I made accommodations for hazards like fights at J’ouvert. I expect revelers from a night of groovy and power soca monarch to be intoxicated; I foresaw the occasional carnival gopwell and I knew a fight or two or seven is just part of the carnival. So why couldn’t the head of the RSLPF envision the same thing? I took my disbelieved fast self to ask a senior officer what was to happen next. He confirmed that he was the only gazetted officer on duty, that the police were overwhelmed with the number of fights, then he pulled his foot out his mouth long enough to admit that his unit for this morning’s activities was woefully unprepared. They never expected albeit prepared for the inevitable fights.

I walked away from the man, angry, disappointed, sad, and surprised that an organization which is always (yep I said always) on the ball could have goofed up so badly. Blame lies not with the imbeciles who started the fights, or those who rained bottles on my parade; blame lies squarely on the shoulders of the Commissioner of Police. Leadership, direction, preparation and contingencies may not have prevented this but would certainly have changed the tone on the dawn of the celebrations.

If five fights happened during the CPL cricket games would the police call off the event? If 15 unsavoury incidents occurred at main stage jazz would the police pull the plug? Harsh lessons need to be imparted for change; sadly, this lesson came with casualties and punishment to thousands of revellers who were denied an opportunity to unwind.