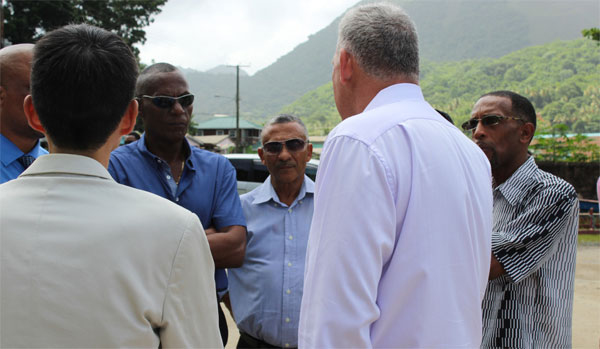 CAN Soufriere’s potential be realized enough to benefit not just its residents but the entire country to the point that it could truly reflect the term “the bread basket of St. Lucia?”

Regularly described as laid-back and undeveloped, despite having natural features that could, if properly managed, transform it into a bustling tourist mecca in the country, this part of St. Lucia has the picture perfect backdrop – the Pitons, seas, rainforests and beaches to indeed impact the entire economy.

Therefore it came as no surprise when a delegation from the new government of Prime Minister Allen Chastanet toured the town Thursday, to assess what can be done to attempt, once again a transformation in Soufriere.

The first stop was at Hummingbird Beach which is heavily patronized by locals but which has potential to be a money maker. Prime Minister Chastanet believes that the beach, if made clean by removing the several pieces of offensively ugly items littering it and constructing facilities for tours, refreshment sand other leisure activities then it could generate more business for operators

Chastanet is not the only one sold on transforming the Hummingbird Beach. The new Board of Directors of the Soufriere Development Foundation is also eager to do just that. In fact Chairman Nigel George , told The VOICE that the idea was always to make Hummingbird Beach “pleasing to the eye”.

Some $1.5 million was put aside for the project when the United Workers Party, under Stephenson King was in government, according to Chastanet. He said that the Government of the Republic of China (Taiwan) contributed $800,000 of that money while the rest came from hotels in the area as the new look beach would benefit them as well.

“Seven hundred thousand dollars were coming from the hotels because everyone saw it to their advantage,” Chastanet said.

Herod Stanislas, the area’s parliamentary representative speaks highly of the beach’s transformation noting that it would provide jobs, which are so much needed in the community.

“I believe it is a great project for Soufriere, for the men and women, for sustainable jobs. It is my intention within the next few weeks to source the funds from friendly governments and the hotel sector in Soufriere for this project. We are hoping, within the next two months, to get the funds to start this project,” he said.

Stanislas assured that every employee on the project will come from Soufriere and Fond St. Jacques.

“We will not outsource any labour from anywhere else and we have the capacity in Soufriere to undertake this project,” he said.