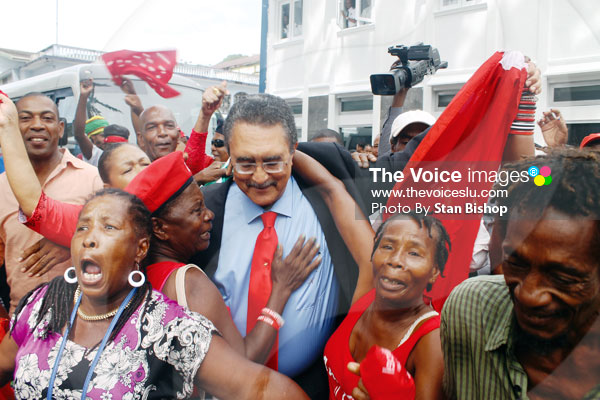 Share this post
HIGH drama might still seem an understatement if the television replay of last Tuesday’s opening of the First Session of the Eleventh Parliament of Saint Lucia is shown.
The area near Laborie Street and William Peter Boulevard was abuzz with activity as scores of supporters came to either cheer or jeer the new members of Parliament who were sworn in that morning.

Clad in yellow and red tee shirts, some people wished the new government well while others asserted that Saint Lucians are already feeling the effects of being misled.

“I hope he does what he’s supposed to do for the people of Saint Lucia,” one woman said. “So I’m relaxing and watching to see what’s going on. Before Allen Chastanet got into power, he promised that he would bring down the (price of) gas. Right now, gas prices are going up.”

SLP’s General Secretary, Leo Clarke, also weighed in on the gas price debate: “What we’ve said previously – even before the general elections – was that these things are not within our control. There was a suggestion that we were manipulating the prices, adding taxes that should not be there. The government is in a position to examine the books to look at the formula that is used and if it was possible to reduce the price, I suppose by now they would.”

Clarke claimed the UWP concocted a series of lies that swayed the electorate in its favour, warning that Saint Lucians will continue to feel the effects of their June 6 choice.

“Our new Prime Minister has started off on the wrong foot,” said former Minister for Commerce, Emma Hippolyte. “He started by not speaking the truth and, oh, what a tangled web we weave when first we practice to deceive.”

Attache to the Prime Minister, Nancy Charles, rebuffed these statements, saying that while in opposition, the UWP had indicated that should it assume office it would “try as much as possible to understand the calculation of the (fuel) prices”.

“When we discussed the calculations,” Charles said, “it was explained to us that these current prices that just came out were as a result of a five-week pass-through mechanism as opposed to the normal three-week (period). This is because the prices were supposed to have changed on June 6 – general elections day, so there was a delay.”

She added that the prices could not have been changed the following week, either, because a new Cabinet had not been sworn in by then.

Meanwhile, Prime Minister Allen Chastanet also spoke to the media outside Parliament last Tuesday regarding the fuel price debate, saying that government is hoping that fuel prices decrease during the next accounting period.

“Obviously, this depends very much on what happens with world oil prices,” Chastanet said.

Chastanet also said he hoped that all five promises made in the “5 To Stay Alive” plan are implemented within the government’s first 100 hundred days in office. (During the Throne Speech, however, Governor-General Dame PearletteLouisy indicated that the new rate for the controversial Valued Added Tax (VAT) should be announced by October.)

There seemed no end in sight for the drama that transpired outside Parliament on Tuesday. One of the highest points of the day was the arrival of the SLP Members of Parliament via a coaster and scores of supporters swarming around the members as they made their exit.

The huge crowd hugged and cheered their comrades as they made their way to the entrance of Parliament building, prompting security personnel to intervene and disperse the highly-vocal group that chanted, “We are not afraid! We are not afraid!” in response to the UWP supporters’ shouts of “Yopé” and “Yoped”.

Seating accommodations were also made in nearby Constitution Park where a huge tent was set up and equipped with a big-screen television monitor via which supporters got to witness the House proceedings live.

While supporters emphasized that Tuesday’s drama outside Parliament was not a protest, they all called on the government to manage the affairs of the State in a proper manner, adding that failure to do so might result in street protests.

However, Gros Islet MP, Lenard “Spider” Montoute, said that while citizens must hold governments accountable, they must also get over the hurdle of seeing governments as being either “a Labour government” or “a UWP government”.

Following the arrival of the Governor-General and the inspection of the guard, the drama that best Parliament gradually dissipated, with many people returning to normal life and the House got down to doing the nation’s business.