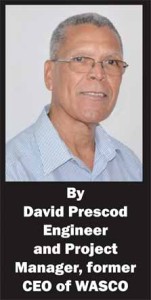 MANY may recognize the caption as being taken from an old nursery rhyme. In today’s world, that nursery rhyme may no longer fit in with what is “politically correct” and some may even find it objectionable, as that line describes what little girls are supposedly made of.

Yet no one seemed to notice, far less object, when possibly one of the most profound changes to our social and economic landscape was repeatedly presented to us a few weeks ago by a smiling, attractive young lady touting its successes.
Albeit taking place at a political meeting in Babonneau, the images carried by the media following that meeting captured the young lady as she dazzled her audience with the achievements of the NICE programme. No one however discussed why it had become necessary, what its benefits were, what it cost the country, and most importantly, where the financing for it had come from.

On the surface, we know why it was said to be necessary as NICE stands for National Initiative to Create Employment. What changed however with the birth of this programme was that Government had now become a major participant in what would otherwise be regarded as private sector activity: employment. How did this happen, and why had it become necessary?

Launched in June 2012, NICE was described in the 2012/2013 budget statement as a programme that would be the beginning of an employment drive in St. Lucia. With an allocation of $35 Million for the first year, the programme was to last for three years, with proposed allocations of $40 Million and $25 Million in the succeeding two years. The budget statements for the next two years make no mention of allocations for NICE however, and the 2014/2015 budget statement, delivered in May 2014, merely restated the number of jobs created in the previous year.

By July 2014 however, NICE workers had been summoned for consultations with government officials. Addressed by the then Prime Minister, they were briefed on the current state of the economy and on Government’s proposals to reduce expenditure. The fiscal deficit was discussed, the then Prime Minister reminding workers that the programme was short term and that they must not have any expectation of permanent employment (St. Lucia News Online, July 30, 2014).

Warning bells having been sounded by the former Prime Minister in July 2014, the NICE programme however received a reprieve in December 2014 with the announcement that a grant of US$10 Million had been received from ALBA for expenditure over a two-year period.

There are, however, a few things that we can learn from this brief look at the NICE programme. The first is that not only had the former government become involved in the creation of employment, but it was also responsible for a new definition of the word “job”. Under that new definition, a job is no longer something that you can look forward to holding for any length of time, nor is it something on which you can base any planning for your life. It’s here today, gone tomorrow, and if you’re lucky, it might come again next year.

The second thing of note is that if we pay any attention to the warnings given to the NICE employees by the former Prime Minister in July 2014, the country cannot afford this programme.

And thirdly, having, according to the former Prime Minister, burnt through that $100m promise, the country has nothing to show for it. Our unemployment figures remain untouched, our economy remains stagnant, and the private sector continues to haemorrhage jobs.

Yet, the programme was set to continue. How could this be possible one might ask? And the answer may lie in the saying which warns that although jumping on the back of a tiger and riding it may be easy, the question is how do you get off? Having established what amounted to little other than a welfare programme over a period of four years, how was a government to end it, particularly with an election due?

Not only that, but anyone suggesting that the NICE and other welfare programmes should not continue exposes himself/herself to charges of being cruel and inhumane, and so resists stating the obvious. The result is that these programmes take on a life of their own and become a permanent feature of the economic landscape even as we cannot afford them, they have no lasting benefit, and they damage the national psyche.

This pattern is not new. Government “make-work” and welfare programmes have been a dominant feature in the life of Trinidad & Tobago for more than 50 years. Starting with “Special Works” in the 1960’s, these programmes have evolved over the years, and with successive governments, to what are now known as the URP and CPEP programmes. These “make-work” programmes are largely felt to be responsible for T&T’s low unemployment rate of 3.5%, a scarcity of labour in the private sector, and a poor work ethic within the population.

By 2013, transfers and subsidies, some of which went to URP and CPEP, amounted to over 50% of the Trinidad & Tobago Government’s total budgeted expenditure. Yet, over the period 2005 to 2014 the poverty level in T&T increased from 16.7% to 25% of the population. These subsidies and make-work programmes have not really helped the poor.

While subsidies were generally affordable when the price of oil was high, today’s oil prices have forced the T&T Government to reduce the fuel subsidy, and there is some suggestion that the rates for water and electricity may have to be increased. But although the Government is considering further avenues for increasing revenue and reducing expenditure, there has however been little discussion of what to do about the URP and CPEP programmes – getting off the backs of those tigers is a politically deadly proposition that no politician will willingly face.

What we have seen in St. Lucia with the advent of NICE and other welfare programmes is a continued de-construction of our societal values, a replacement of a system of employment within productive enterprise with one in which employment is dependent on a Government hand-out. Even more damaging, NICE targets our youth, and while they are truly in crisis, the fostering of a dependency syndrome in our youth can only be devastating to their future, and to ours.

Indeed, while the country has invested a little over $100m on these make-work programmes, not only has no industry been created which would provide continuous long-term employment, but at the end of the recent election campaign the former Prime Minister advised that of the $100m spent, $20m had been grant funds while the rest had come from loans.

Yes, we borrowed $80m so that we could be “nice” to our unemployed youth, who are unfortunately still unemployed and have little hope for future employment as the country can no longer borrow any money.

Imagine, however, if we had invested a fraction of that borrowed $80m in three or four hundred acres of farmlands inclusive of irrigation, drainage, technical and management expertise, and leased those lands to young entrepreneurial farmers in plots of one-acre to five-acre sizes. Then, not only might we have generated employment for a few thousand young persons, but those young persons and their families would also have had reason to be proud of themselves and of their accomplishments.

Not only that, but the money invested in the farming infrastructure would be recovered from the lease arrangements, allowing not only for the programme to expand, but for the income generated to be invested in other areas. This is not just a nice sounding theory, as Jamaica has undertaken just this path for agricultural development, and as reported in an earlier article, managed to achieve a reduction of 4.5% in the level of their food import bill in 2014.

We need to refocus this NICE window-dressing and address ourselves seriously to finding long-term solutions for our current unemployment crisis. And where there’s a will, there’s a way.