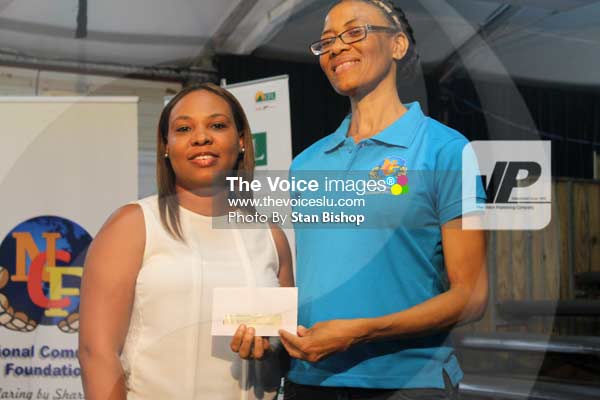 THE spirit of giving generously was the central theme espoused at the National Community Foundation’s 13th annual nationwide telethon held at the National Cultural Centre (NCC) last Sunday. However, digging deeper is the present call.

A short list of artistes provided entertainment on the day and made appeals for Saint Lucians to dig deep into their pockets to support the NCF’s many philanthropic causes. Performances came from NaomieNgoziGrandison, the Jon Odlum Theatre Arts Group, TC Brown, RasIzley, Rob “Zii” Taylor and Phyness George, Jay and Bronxx, Linda “Chocolate” Berthier, Mongstar and Arthur Allain.

One of the misconceptions about the NCF is that many people believe that the monies raised during the telethon are the NCF’s total budget. However, the telethon is basically a supplementary drop of resources in the NCF’s coffers to meet growing requests from the community.

For instance, the NCF also receives many requests for medical assistance, especially from cancer patients, many of whom have to seek treatment overseas. Board member of the NCF’s health committee, Dr. Martin Didier, says over 60% of the health budget goes towards cancer patients. (On Sunday, Dr. Didier received a special treat for his many years of volunteerism to the NCF).

Another example: the NCF’s annual education budget alone amounts to over $300,000, with the National Insurance Corporation (NIC) contributing most of that amount via a standard agreement.

Christal Felix is a full NCF scholarship holder and currently a Fourth Former at St. Joseph’s Convent who gets an annual voucher from NCF for school books, shoes and uniforms. The scholarship runs for her five-year tenure at secondary school

“It’s lifted a heavy financial burden,” she told The VOICE. “So instead of focusing on where I would get my school supplies, I just focus on getting good grades. That’s all the NCF asks of us: getting 60% and above in every subject. But apart from caring about the grades, they also show that they care by allowing us to have a good education.”

Felix expressed her gratitude to those who make her scholarship possible and encouraged them to continue pledging to the NCF.

“Not only do their contributions help students like me but also people who need medical assistance, the homeless and other causes. The little they give goes a long way,” she said.

Jahdiel Verdant is another full NCF scholarship holder and attends Entrepot Secondary School. The Fourth Former said that apart from lifting a financial burden off his parents, the NCF’s assistance comes in other forms.

“The support system and encouragement from NCF to always strive to achieve my best has also benefited me greatly,” Verdant, who also manned the phones on Sunday, said. “Sometimes I tend to not have the zeal, passion and energy to hit the books. Then I remember the target that NCF wants me to achieve.”

Another scholarship holder, Rocksun Mathurin, is thankful to the NCF for assisting her through its “caring by sharing” mantra. The Fourth Former from St. Joseph’s Convent also believes that the little that donors give today can bring them greater rewards tomorrow.

This year, the NCF paid tribute to longtime volunteer, Ronald “Boo” Hinkson. The iconic guitarist/songwriter/producer has donated his talents, resources and time throughout the years to make a difference in the lives of many, including the at-risk youths he mentors.

Hinkson started playing music at primary school and went on his first music tour at 14, eventually performing in the United States for the first time at 16. He told The VOICE that having been fortunate to realize his dreams, he remains committed to ensuring that others do.

“I’ve been committed to the NCF for many years now. I’m very aware of my civic responsibility as a Saint Lucian and anytime I’m called upon to contribute in that form I’ll be there,” Hinkson said.

Hinkson described the NCF’s tribute to him as “a great privilege” and hopes that it inspires others to do their part to uplift the community. As he tells it, it’s all about Saint Lucians helping Saint Lucians.

“This is our country, nobody else’s. I mean, we cannot sit back and expect people to do everything for us. We have to be the change we’re looking for. So I have to be part of that process,” Hinkson explained.

Hinkson added: “It doesn’t matter how much we have, there’s always someone who has less. I’ve learned in life that anytime I contribute to people who cannot afford to repay me, God takes care of me in a big and much better way.”

Meanwhile, NCF Executive Director, Madonna Monrose, told The VOICE yesterday that the telethon has thus far raised $146,000 of the $200,000 target. That amount includes contributions and pledges. Despite CFL/Super J, making a $25,000 presentation prior to last Sunday’s telethon, Monrose said the NCF continues to accept pledges and donations.

“We’re hoping that within the next few weeks the corporate donors and individuals who have not made their contributions would do so,” Monrose said. “These contributions go to deserving causes, especially vulnerable people.”