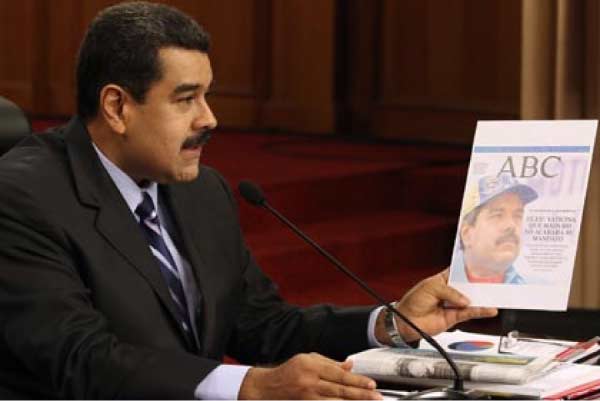 CARACAS, Venezuela– President of the Bolivarian Republic of Venezuela, NicolásMaduro on Tuesday convened a Press Conference to explain to the world what he described as “the economic, political and diplomatic aggression currently facing Venezuela: the most severe in the over 17-year history of The Bolivarian Revolution”.

He stated that Venezuela was facing an attack via world media that sought to establish a false picture of uncontrollable social and economic decline in the country, leading to calls for a political – military intervention. He stressed that the media campaign against Venezuela was designed to generate impressions of chaos and violence, leading to intervention by the United States Government.

President Maduro stated that Madrid, (Spain), Bogotá, (Colombia) and Miami (Florida, USA) were “the epicentres of a strong media campaign against Venezuela”, and reported that from January to April this year, there had been 1,315 news items about Venezuela in different media located in these three cities, of which only two were positive.

As an example of this negative campaign, the President showed folders of different Spanish media such as ABC, El Mundo and El País, where news against this South American nation or his person had been published, adding that “they have covered the front pages of newspapers in a customary manner.”

The situation of Venezuela, he said, had its genesis in a non-conventional war orchestrated by sectors of the national bourgeoisie and the right-wing, as well as the decline in oil prices.

He reaffirmed that, amid threats and the international financial blockade, Venezuela works for social justice of the people through institutions such as the National Council of Productive Economy, the organ of Communication between the State and business sectors.

Also, Maduro said that the role of the main leaders of the opposition was to ensure riots and violence to generate sufficient credibility to put into effect the plan of action of the Government of the United States. However, stressed Maduro, “we are dedicated solely to serve all the Affairs of our People: the employment, pensions, public education, and primary healthcare, etc.”

On the economic front, President Maduro indicated that they have established 15 priority areas that make up the programme of the Bolivarian Economic Agenda – which will be the focus for the coming years – with a renewed capacity for production of wealth and the satisfaction of domestic needs, in order to overcome the effects of low oil prices.

In that regard, he pointed out that this economic revolution also has enlisted the active participation and leadership of the people themselves, through the local committees of Production and Supply, which seeks to bring food directly to families and stimulate production.

The President stressed that this initiative will also neutralize the different sectors which have subjected Venezuelans to unnecessary discomforts and inconvenience through the tactics of hoarding, boycott, usury and smuggling of essentials.

The Venezuelan President also reported that a Boeing 707 plane from United States (U.S.) equipped to do espionage work carried out illegal flights in Venezuelan airspace on May 11 and 13, an action which will be protested before the North American country. He said that this type of aircraft is used by the U.S. to support communications of armed groups or prepare the conditions to inhibit or disable electronic equipment.