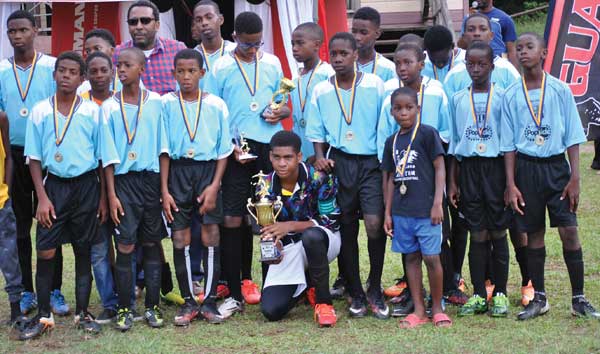 The finals featured GMC United under head coach Chris Monrose and First Touch/Pioneers coached by Adrian Vaudroque, the two teams looked evenly poised with both showing that they were all set to hoist the inaugural trophy.

From the very first whistle GMC United came out firing on all cylinders pushing for an early goal, but First Touch’s defense was locked down by two key players, Joshua Boland playing in a central back position and Marcellus Belmar in goal. Despite GMC’s aggressiveness First Touch/Pioneers had more ball possession and got paid with a free kick in a dangerous position. Boland took charge of this set piece and with poor wall setting by GMC, slammed the ball to the back of the net in the 8th minute ending the first half 1 – 0.

On the resumption both teams stepped up the tempo and in the process squandered a few scoring chances, but that’s how the score line remained up until the final whistle 1 – 0 in favour of First Touch Pioneers.

In the third place play- off dubbed a “Marchand derby” featuring B1 Juniors and Big Players, both teams showed very good discipline in defending with few chances in attacking as the score line remained goalless after regulation time.