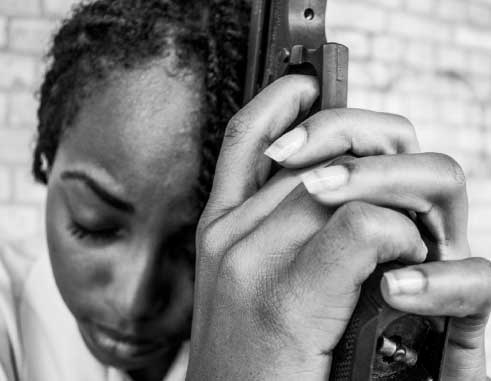 The nation is still reeling from the death of a female beauty in her early twenties from Trouya, Gros Islet who apparently committed suicide at the beginning of March. This incident was not one to be easily swallowed by a large section of the public, especially after the postmortem returned the cause of death as “suicide”– no foul play suspected.

Why is it so difficult to accept that young, beautiful and productively employed persons also fall into the clutches of despair, as compared to accepting that a deadbeat, worn out male can take his own life? Human beings have similar human feelings regardless of their station or status in life.

Whatever the conditioning our society provides in terms of how we judge and regard beautiful and successful people, the fact is anyone can fall victim to excruciating negative emotions such as feelings of betrayal, guilt, shame fear, failure, worthlessness, anger, pessimism, disappointment, regret and hopelessness.

There is need for the entire community to work on increasing their emotional intelligence. This would bolster our sensitivity to others and naturally enable us all to understand that depression and sadness can affect anyone. Anyone can become vulnerable as a result of current stresses and social pressures, long-term problems associated with early abuse or trauma, relationships, financial woes, chronic pain and physical disability among others.

All these challenges are part of the human experience. Some people are manic depressive and this condition has a medical context to it which suggests that without proper treatment such persons are very likely to hurt themselves.

What makes the difference is how the person decides to deal with the unfortunate circumstances of their lives. Some people are determined to go through the pain and turn something negative around for the better. Some people do not believe they have the strength or willpower to face the ugliness of the situation, especially if there is an unpleasant life change to cope with.

Constant talking to trusted persons (communication) and giving of unconditional love and support is the best family and friends should provide through the storm. It must be remembered that not all individuals who are thinking of suicide are able to muster the optimism to believe that “this too shall pass”. Some people need professional and medical support just to cope with life’s expected challenges. The thing about suicide is that so very often persons surrounding the victims are unaware or in denial of the warning signs or are not taking them seriously enough to mount an intervention.

This in turn means victims are leaving behind several self-blaming, traumatized family and friends. Who is counselling them? Abetta Country believes that the survivors of suicide victims should themselves be debriefed and receive counselling and other support to help them recover from such a traumatic experience. Public sensitization needs to be strengthened on this topic which incidentally is very broad. The following are some snippets of information that will hopefully cast some light on the issue of suicide and suicide victims.

The common emotion in suicide is hopelessness/helplessness.

A pervasive sense of hopelessness, defined in terms of pessimistic expectations about the future, is even more important than other forms of negative emotion, such as anger and depression, in predicting suicidal behaviour. The suicidal person is convinced that absolutely nothing can be done to improve his or her situation; no one else can help.

The common internal attitude in suicide is ambivalence.

Most people, who contemplate suicide, including those who eventually kill themselves, have ambivalent feelings about this decision. They are sincere in their desire to die, yet they simultaneously wish that they could find another way out of their dilemma.

The common mental state in suicide is constraint of thoughts.

Suicidal thoughts and plans are frequently associated with a rigid and narrow pattern of thinking that is comparable to tunnel vision. The suicidal person is temporarily unable or unwilling to engage in effective problem-solving behaviours and may see his or her options in extreme all or nothing terms.

Always remember that suicide is not a label or an outcome reserved for people who are ugly, unsuccessful and broke. It can happen to anyone and everyone. Let us play our part as Saint Lucia faces this challenge.