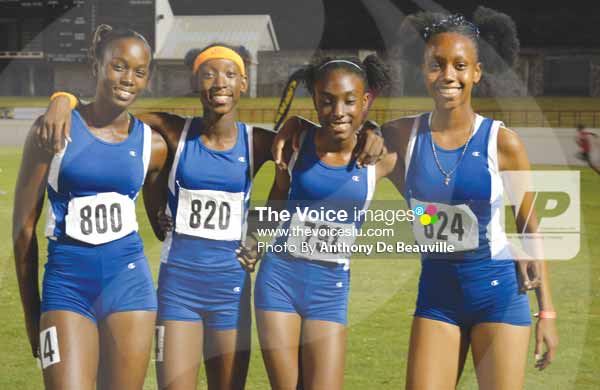 DESPITE adverse weather and the decision by a number of schools not to allow their athletes to compete in most of the afternoon session to avoid any injury at a wet Beausejour Cricket Ground, St. Mary’s College and Vieux Fort Comprehensive (La Ressource) (Girls) were crowned champions as the curtains came down on the Inter Secondary Schools track and field championship.

The Samarians finish on 257 points winning the under – 14s (93 points), under – 16s (87 points) and under -18s (77 points). They were followed by Vieux Fort Comprehensive on 212 points for second place and AnseGer Secondary on 142 points for third place respectively.

The girls from Vieux Fort Comprehensive (La Ressource) were the big winners amassing 278 points, St. Joseph Convent won three out of the four divisions they competed in to finish second place with 250 points and Castries Comprehensive on an even 100 points for third.

Acting permanent secretary in the Ministry of Youth Development and Sports Dr. Anthony George told The VOICE he was very pleased with the performances of the athletes. He said: “Just their perseverance, the talent on display despite the rain coming down, it’s just great. For me it was the first school sports championship I had the chance to administer; I will admit that I may have come in mid-way in the planning. For me it was a wonderful experience. I saw the passions; I saw the energies. I saw the support of the schools”.

He praised the dedication of not only the physical education teachers, and the coaches of the athletes, but of the officials as well as members of staff of the Ministry of Youth Development and Sports. George said, “The support of the schools was really tremendous, the energies, the chanting – even if they were of lesser numbers than others; they way that they cheered their athletes on. They recognized them as their champions. That is what was beautiful about this. They celebrated the perseverance, the strength, and the talents. The way they supported and cheered their own schools on. ”.

There is obviously some areas the Ministry needs to improve on the championship. He was referring particularly to the support of the public. They need to see more parents and guardians, more relatives and friends. The Ministry needs to see the wider public coming out and really celebrating the tenacity and the preparations of the athletes for such a great event.

Dr. George said, “There are some difficult and challenging areas we will need to cross. The suitable gear for students that was evident even in the conditions, running, shoes. You know after the rain some of the physical education teachers and coaches decided that they could not endanger the well-being, and safety of the students. So if you recognize a number of races after the rain, we had a number of three, four, five schools competing. In fact, I believe a majority of the schools decided that they would not continue to race in such conditions. Even if the Beausejour Cricket Ground is a well maintained facility and the surface is compact, they decided that the well-being of the athletes is of paramount importance to them and they chose to withdraw. That’s a choice the schools had to make; that’s a choice the coach and teams had to make. The Ministry of Youth Development and Sports would not pressure the schools”.

He continued, “The technical team decided that the conditions were satisfactory to continue. Even after the water hog went through and drained the tracks, some chose to withdraw. That’s fine. We really need to equip our athletes in order to get the optimum performance for them. I just want to salute the schools that continued, the schools that stayed and continued. Thankfully we had no accidents; so much so that nothing that I recognized”.