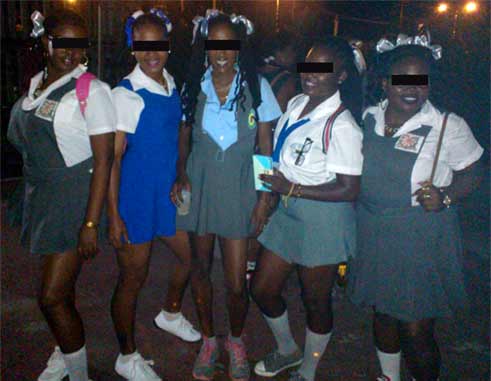 IS the Ministry of Education of Saint Lucia sanctioning the use of school uniforms as party costumes?

The school uniforms of many secondary schools have now become associated with party organizers using these patterns as themes /costumes for private parties.

We believe this development is questionable, unacceptable and directly attacks the level of dignity that should attend the image of schools and their students. This is an attire which is distinctly accorded to a particular group of persons in the society – youth who attend secondary schools and the SALCC.

School uniforms command an unwritten contract of respect between the student and the public. School uniforms come with a specific code of conduct. Adults wearing school uniforms to their adult functions have no intention of abiding by the institution’s code of conduct which includes no consumption of alcohol and no fraternizing, among other restrictions, all aimed at ensuring that “the school” as an institution remains above board and is not dragged into disrepute.

Seeing non–students or past students of schools attending social events in often times carefully altered school uniforms, clearly cut to convey sexual undertones is very gross and is a disgrace waiting to happen. This trend must be nipped in the bud with a dose of legal intervention to squash it completely before a school or two are seriously discredited or placed in an awkward position.

Schools work hard to instil in students the morals and values that will redound positively to their future and to that of the society as a whole, in these times of high indiscipline and poor parenting practices. This practice of grown-ups wearing uniforms about the place to go party is the last thing educators need to be confronted with. It will only compound their already insurmountable challenge of getting every child to respect themselves and their school uniforms.

School uniforms should be the preserve of school children. They have worked hard and earned the right to wear their uniforms, let them wear it proudly and if they falter it is for the adults to reinforce the importance of their identity as students. It is also the preserve of the Ministry of Education and government to either OK such nonsense or take corrective action.

School uniforms as fete attire are unfair to the schools; they have no influence over how those adults conduct themselves. When it comes to adults who have left school it is virtually impossible for the schools to control how those people behave while wearing various school shirts, overalls and school crests. At the end of the day any adult can descend to the lowest level of debauchery or lawlessness whilst wearing such attire, with absolutely no regard for, or accountability to the school next day, or for the hundreds of young people will feel embarrassed to be associated with some negative incident. School kids, unlike the adults who can wear other things, have no choice but to wear school uniforms to attend school.

We should not be so permissive and “pas mèlè” in this country as to allow adults to also wear uniforms to go socializing.