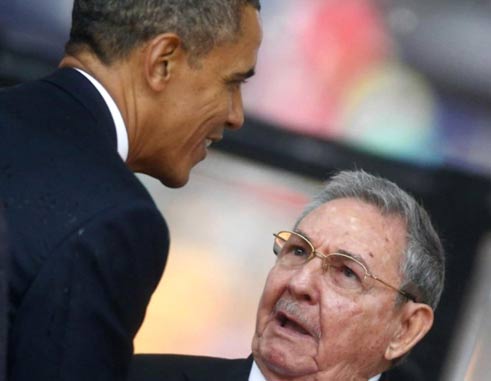 WHEN Barack Obama became President of the United States of America I was as filled with optimism as every other person on the face of this earth who had looked forward to a day when we could have hope for change in how America behaves on the world stage.

I always preached that the presidency of the USA is an institution that’s always bigger than the person holding the title. After all, Presidents come and go, but “Uncle Sam stays. However, partly following Obama’s first campaign, I couldn’t help but to accept that there was definitely something behind his defiant theme that ‘Yes, we can!’

When he won, I was sure he must have long worked-out what he would like his legacy to be after being ‘The first Black President in the White House’.

I was not sure America was prepared for a black President in this age of still-clear white supremacy. But something told me Obama would do some brave things. The bravest, I wrote back then, was that he would most likely send his wife Michelle to visit Havana before he left office. I even suggested The First Lady might visit ‘El Capitolio’ – the Old Havana-based replica of ‘The Capitol’ building in Washington.

I held though, that there were some things Obama would not be able to achieve — even if he won a second term — among them the lifting of the crippling US embargo against Cuba. But halfway into the end of his second and final term, Obama stumped my middle wicket. His announcement that he wished to ‘normalize’ relations with Havana caught me – and the rest of the world — totally off guard.

I knew that the Republicans remained determined to screw Obama to an unholy cross – and by any and every means possible. But even if I knew too that they couldn’t prevent him from visiting Havana, I didn’t feel Obama would not have stuck his middle finger to them.

I was somehow fortified by the recollection that Obama’s predecessor Bill Clinton had also found a way to stick it to the system as soon as he exited the White House and the Oval Office. He had defiantly lit a Cuban cigar in the ‘No Smoking’ diplomatic lounge at Heathrow Airport — and in full view of the press. I concluded that if that former US President could have so kicked his country’s own ban on that Cuban product, I could maybe expect more from Obama. But become the first US President to visit Havana in nine decades? I never even entertained the thought.

After the Republicans took over the Congress and challenged Obama’s Immigration Policy initiatives, I actually thought he was caught between a rock and a hard place. I felt too (and still feel) that if Hillary Clinton succeeds Obama, his Cuba policy will also suffer.

When I read the AP scoop the day before the visit’s announcement by Washington, I waxed warm. It was my son’s birthday and him being in the USA, I somehow considered it a welcome gift to him — from Obama, in my name. After Obama returns and Cuban President Raul Castro takes his turn to visit Washington, he will live to say too ‘I was there!’

Obama has indeed turned the American tide on Cuba. He wasn’t able to close down the Guantanamo prison camp at the American base there, but he did ‘fess-up to the fact that US policy towards Cuba had failed for over five decades and needed to change from isolation to engagement. Under his watch, the containment policy continued, but towards the end he decided to make that move.

Thanks to the help of Pope Francis, now the twain shall meet. Obama won’t get the Congress to lift the embargo, but even here too he will have seen, all of seven times, the annual isolation of the USA and Israel by the rest of the United Nations member-states during the annual vote calling for it to be lifted. He’ll now go to Havana after also changing the game in the Cuban American community in Florida.

Previously dominated by political exiles violently hostile to ‘Castro’s Cuba’, today’s Cuban Americans are mostly US-born younger elements who yearn for contact with their hitherto unseen families. Obama has made it easier for them to travel and send money to relatives, opened-up communications and reduced postal tightness. In turn, for the first time in their history as a political force, the Cuban Americans in Florida voted democratic in the last presidential election. In addition, organizational non-governmental contact between the USA and Cuba farmers mushroomed under Obama. From farmers to religious leaders, actors to civil rights leaders, all started visiting without earlier restrictions and built new ties with their Cuban counterparts.

Looking back, it’s only now easy to assume that Obama had worked out his Cuba policy from day one. He knew all along that he would face Republican filibustering on The Hill. But he never expected that just as he would be about to take his first trip to Cuba, two right wing Cuban Americans would be rivaling Donald Trump to see which could more oppose Obama’s Cuba policy. Ted Cruz and Marco Rubio may sound like doves next to Trump, but on Cuba, all three are hawks.

Obama’s Cuba legacy will definitely be carved during the over 300 days he has left in office. He has no say in what his successor will do, whether Democratic or Republican, so he might as well do all he can before departing Pennsylvania Avenue.

The hawks will crow loudly and bare their claws frequently between now and November to turn back whatever progress is made under Obama to improve ties with Cuba. Just ahead of his first flight south to the island, he’s agreed to make it possible for any US airline to fly to any of Cuba’s commercial airports. He’s sent Secretary of State John Kerry and now Obama is making the trek.

There will be things Obama may not achieve. The embargo will not likely be lifted under his watch and the US Naval Base at Guantanamo Bay may not be returned to Cuba. In these circumstances, relations between Cuba and the USA will never be ‘normalized’. But by personally and officially breaking the political blockade between Washington and Havana, he has not only broken a major barrier, but has created new avenues for US-Cuba ties that any future US President thinking like him will be able to take to the next level.

Will the independent Democratic Socialist US presidential hopeful Bernie Sanders be the man to take Obama’s Cuba legacy to the next logical level? It’s too early to tell, even though he continues to give Mrs Clinton a run for her money. But even if Sanders wins more regular votes than her, he will need a clear maximum lead to avoid being screwed into the ground by the over 700 Super Delegates (including her husband) who are determined to choose her as the Democrats’ preferred establishment presidential candidate.

A Sanders win would not only shake-up America. It would totally reshape America’s international policy in several respects. Put that alongside the fact that the British Labour Party’s equally frustrated rank and file also dumped the establishment candidates and elected socialist Jeremy Corbin by the widest margin and Washington’s hawks – on both sides of the political divide — start to see the ‘Stars and Stripes’ and the ‘Union Jack’ changing colour, if ever that twin should meet.

Conservative America will go after Sanders with more than just coin tosses or ‘super delegates’. But then, just as the Republican establishment is finding it hard to trump ‘The Donald’, so too are the Democratic conservatives finding it hard not to feel the Sanders ‘Burn’. Both are proving to be more than just the usual short-living challengers like Ross Perot or Sarah Palin.

Sanders and Trump are both showing they already have some shelf life. But if they continue to dumbfound the critics, the future of the USA’s Cuba policy could fall between them.

In that case, there’ll still be some hope for the growing majority of Americans who want to see better ties with Cuba and an end to the over five decades of hostilities that Washington has pursued in an effort to force the island’s revolutionary government into submission.

Obama has broken the ice. He’s brought US-Cuba ties from the Ice Age to Internet Age. No matter who wins in November, Americans will be flying and cruising to Cuba like never before. A new century of ties will have begun on a positive footing, with much scope for improvement. That a future US President will find hard to undo.

And that alone will be enough of a legacy for Barack Obama to stand out among his living peers.