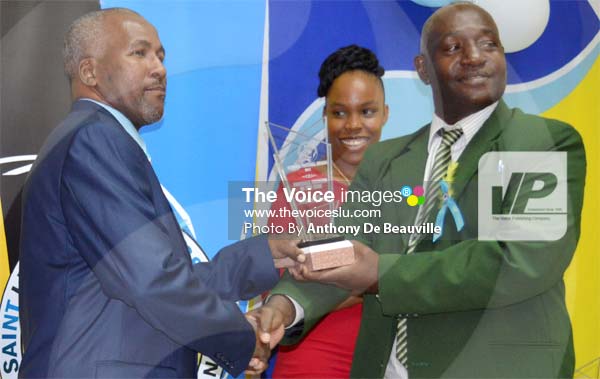 THERE was only standing room available on Saturday evening when the St.Lucia Football Association held its revived national football awards at the Palm Haven Hotel in Rodney Bay.

The highlight of the evening was the announcement of Shanet Joseph and Nyron Winter as the junior male and female Footballer of the Year respectively, while former SLFA secretary Hudson Kelly and national under – 15 coach Albert ‘Vaso’ St. Croix won SLFA Lifetime Achievement Awards.

The senior Footballers of the year were not present.

The gala started off with the national anthem, then prayers followed by welcome remarks and congratulatory messages from 1st vice president Stephen Regis, newly appointed Permanent Secretary in the Ministry for Youth Development and Sports, Dr. Anthony George and SLFA President, Lyndon Cooper.

A special recognition and tribute was paid to the departed sports journalist, Brian “Ipic” Mc Donald which was presented by Anthony De Beauville of THE VOICE.

Following the tribute individual awards were presented in the various categories. The Junior Female Footballer of the Year went to 17 year old Shanet Joseph of Soufriere, who represented her country in the CFU Under – 17 Women’s Qualifiers held in the Dominican Republic and also CFU Under -20 Women’s Qualifier held in St. Lucia in 2015.

Last year, the SLFA in collaboration with the Ministry of Youth Development and Sports and the Ministry of Education embarked on revamping Women’s Football in all secondary schools. Joseph’s skill was evident and contributed to her school Soufriere Comprehensive emerging champions of the inaugural female Secondary School competition.

The Junior Male Footballer of the Year award went to Nyron Winter of Vieux Fort South. Winter is a brilliant player whose skills have brought out the best in his district and country. He has represented his country with honour in the CFU Under -17 tournament. His hunger and passion for the game had fans and teams astonished by his talent and leadership he showed on the field of play. His contribution to the team resulted in St Lucia reaching the third round and final qualifying stage for the first time in CFU, CONCACAF a

The Best Supportive Football District was the Soufriere Football League, while the National Lotteries Award for Excellence in Football was captured by Emmanuel Bellas. The Meritorious Service Award to Football was won by Brian Mc Donald, while the award in his name for Football Journalism went to Helen Television System, and Radio St. Lucia, and Print THE VOICE, which captured the overall title through Anthony De Beauville.