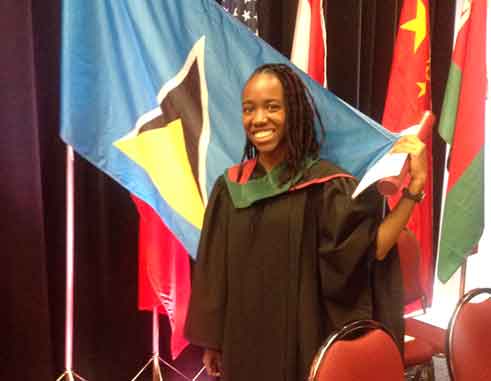 Joy is the daughter of popular local arts personalities Kennedy “Boots” Samuel and Christine Samuel. She is a graduate of the Leon Hess Comprehensive Secondary and the Sir Arthur Lewis Community College. She entered St. Mary’s University in 2012 and has successfully read for her Bachelor of Arts Degree in Environmental Studies. Before leaving Saint Lucia for her studies she was an active member of the Saint Lucia National Trust helping particularly with the Youth Education programmes.

Joy was chosen as the Valedictorian for the Convocation ceremony at St. Mary’s University among a large group of graduates hailing from countries all over the world. In her address she made a point of highlighting and promoting her beautiful country of origin and generated much interest and applause from the large gathering of prominent academic personalities and guests present.

In addition to the Bachelor’s Degree conferred on her, Joy Samuel received the highest award for academic excellence, and is recorded as being admitted to the President’s Hall of Academic Excellence during the Winter Convocation 2016. She also received the St. Mary’s University Fitzpatrick Valedictorian Award which is awarded to the student who delivers the valedictory address.

During her undergraduate years at the University Joy received much praise for her work and energy beyond the academic realm as she worked in many capacities including Resident Assistant, Resident Services Officer and Counselling Centre Assistant. She is an active member of the Environmental Society and served as its President. She also volunteered in numerous organisations both on and off campus providing her leadership in many community events.

Joy has expressed her gratitude for the student loan programme of the Saint Lucia Development Bank through which she was able to do her undergraduate studies in Canada.