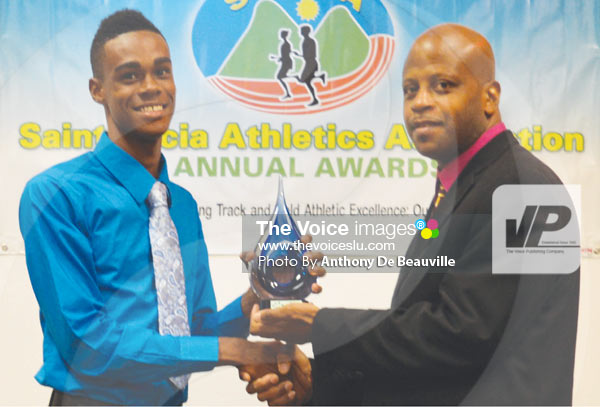 The other two are junior male high jumper Ace Louis and junior female Heptathlete Julien Alfred, dominated their events during the past season.

Louis had a very impressive start to 2015. At the school level, he won gold at the Sir Arthur Lewis Community College sports meet clearing a height of 2.00 metres, and 2.01metres at the annual inter secondary school track and field championships. At the national level he captured gold in the SLAA League Challenge with a height of 1.90 metres, won gold at the Independence Invitational, the National Juniors (Carifta Trials) 2.00 metres and at the National Individuals track and field Championships. At the Carifta Games in Martinique he won bronze and in the process set a personal best with a height of 2.11 metres.

Alfred, a former student of the Leon Hess Comprehensive now attending college in Jamaica won five gold medals (100m, 200m, javelin, shot putt and long jump), at the inter secondary school track and field championships; she captured gold in the 100m, 200m and silver in the shot putt. At the Independence Games Alfred set a new games record in the Heptathlon with 4249 points. She went on to capture gold in the 200m at the national junior’s and in the process set a national record in a time of 24.27 seconds.

Alfred’s good run of form continued at the 1st National Bank 14 and under Games where she again set a new record in the Heptathlon with a total of 4254 points. At the Windward Island School Games in Dominica she captured the only gold medals for St. Lucia winning the 100m and 200m. At the Central and Caribbean Juvenile track and field age group championships in Trinidad and Tobago she set a new national record and CAC Games record with 4466 points in the Heptathlon.

Spencer continues to ensure that the St. Lucian flag is being flown at almost every track and field meet that she competes in. On the Circuit Level she won three gold, three silver and two bronze medals with her best height being 1.94 metres in Madrid Spain.

On the regional, at the North America and Central America Senior track and field championships Reynolds captured the bronze medal with a throw of 77.71metres to reset the record book, while at the French Championship he finished fourth with a distance of 69.58 metres.

Also receiving their awards on the night were the 14 and Under Games Victor and VictrixLudorum for 2015.

The Juvenile Male Athlete of the Year went to Tyler Toussaint representing Speed Printing Survivors. Toussaint won gold in the 14 and under Heptathlon at the Independence Games. At the 1st National Bank St. Lucia Limited 14 and under Games he won gold in the 8 metres dash, 300 metres, shot putt and silver in the long jump and high jump.

His good run continued into the National Individual Championship when he won silver in the high jump, cricket ball throw and long jump and gold in the 1200 metres.

At the Caribbean and Central American Age Group Championship Tyler came in 4th in the 14 and under Boys Heptathlon with following performances – gold in the 80 metres hurdles and 80 metres dash. He was also a member of the 4x100m record setting mixed relay team.

The Coach of the Year title was captured by Cuthbert Modeste from Speed Printing Survivors, who received a standing ovation from the audience present for his outstanding work on the track especially with the under-14 athletes.