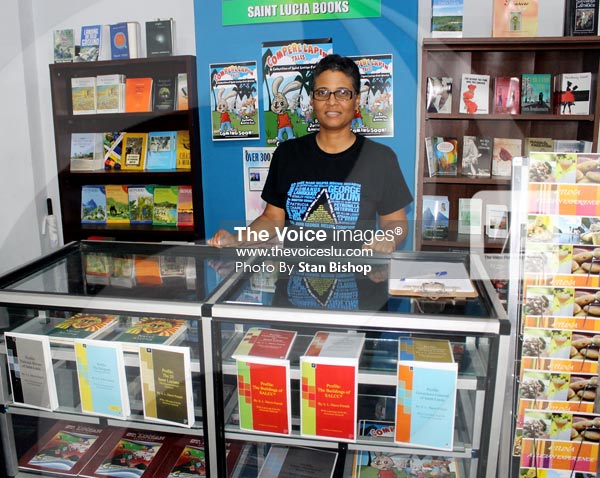 Share this post
IMAGINE yourself sitting in a Rituals coffee shop sipping a cup of hot cappuccino while flipping through the pages of Derek Walcott’s “White Egrets”, KendelHippolyte’s “Fault Lines” or any of Dawn French’s extensive collection of books. For now, the imagination might seem far-fetched but – just like a cleverly-told piece of fiction – anything is possible when it comes to books and steel-willed determination.

Thanks to Dahlia Francois, the brainchild of Saint Lucia Books, reading a Saint Lucian writer’s work can soon become as iconic a pastime as sitting in the lotus position on the floor of a Barnes & Noble bookshop in New York leafing through Walt Whitman’s “Leaves of Grass” or James Baldwin’s “Go Tell It On The Mountain”.

With Sunshine Bookshop closing down its outlets, both writers and readers in Saint Lucia have suffered from the fallout of not having a full-fledged bookshop. However, many moves have been afoot to rectify that poetic and prosaic injustice.

A key moment in that crusade came during this year’s Nobel Laureate Week when an extended book exhibition featuring Saint Lucian writers was held upstairs Blue Coral Mall in Castries. It turned out that the works of over 150 Saint Lucian writers on display there dropped some jaws and business has picked up a bit for the local book sector ever since.

“People have been buying the books,” Dawn French told me recently. “Many were even surprised that there are so many Saint Lucian writers despite us not having all the writers’ works featured here.”

French was manning Saint Lucia Books’ booth at this year’s Saint Lucia-Taiwan Partnership Trade Exhibition held last month at Johnsons Centre when she gave me the scoop about Saint Lucia Books’ mission. The newly-formed company, she told me, will be charged with selling books on the writers’ behalf and paying them quarterly based on sales. The company will receive a small fee from the writers.

French has been writing for 40-plus years now, having started as a child and having her poems published in The VOICE. The prolific author has penned over 300 books thus far. The setting up of a bookshop is something that many writers have been clamouring for since many of them are forced to sell their books privately. The local book business is tough for writers, she told me.

French said Saint Lucia Books representatives have already begun networking with a number of local agencies – including a supermarket chain — to have their books on sale there. Many of the writers also sell their books online. But, like French, some readers prefer the feel of a paperback that they can run their fingers through and insert a bookmark at random.

“We’re open to all dialogue because right now Saint Lucia does not have ‘a proper bookshop’. We have some outlets but they really cater to the schools,” French said.