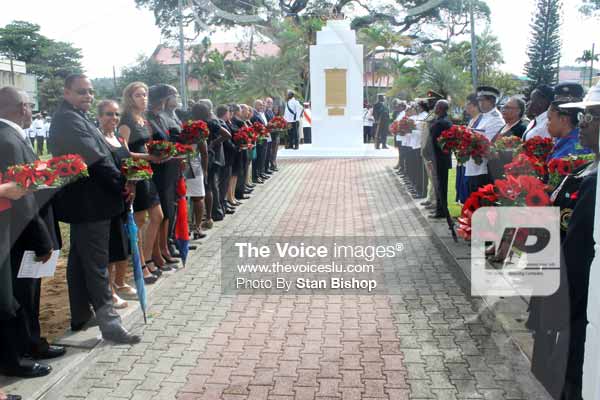 THE overcast sky seemed the perfect backdrop last Sunday morning as the main observance for this year’s Remembrance Day took place at the War Memorial in Derek Walcott Square and George V Park.

The Royal Saint Lucia Police Force Band and other uniformed groups began the proceedings with a short parade from Police Headquarters to the Square following which prayers were said.

Governor-General Dame Pearlette Louisy, Prime Minister Dr. Kenny Anthony and Leader of the Opposition, Dr. Gale Rigobert, joined members of the diplomatic corps, veterans’ relatives and other groups in paying tribute to the veterans who fought in World War II.

Remembrance Day is observed annually to pay homage to the heroic efforts of those who sacrificed much in the pursuit of freedom in past wars. On November 11 at 11:00 a.m., the date and time when the hostilities stopped after more than four years of battles in World War I, people stop work and observe a moment of silence.

World War II veteran, Reginald Cherubin, served from 1942, starting in Trinidad before being transferred to British Guiana (now Guyana). He later went to his native Grenada and was transferred to Saint Lucia where he has remained since.

Cherubin’s five and a half years of service to the war effort was restricted to the Caribbean. He began serving in the Royal Artillery before moving on to the Royal Army Medical Corps. Like Haynes Cyril, who now serves as Secretary of the Ex-Service League, Cherubin is among the few surviving Saint Lucians who fought in the last great war.

During World War II, which lasted from 1939 to 1945, many Saint Lucians joined the war effort on Britain’s behalf. Records indicate that 15 were killed in action, while 9 died in active service.