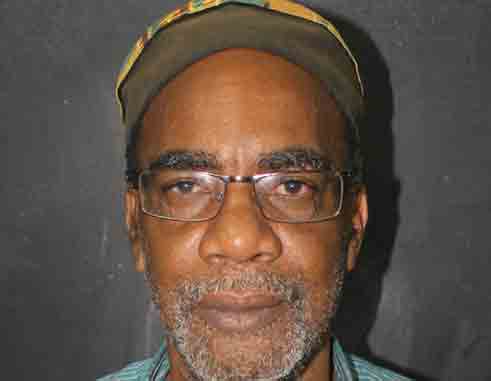 AT 55, playwright/director Hayden Forde still thinks he has more words to write and plays to direct.

After plunging into a pool of words as a poet and actor nearly four decades ago, two key words seem to dominate the seasoned playwright’s conversation these days: play and write.

Born in La Clery, Castries in 1960, Forde got introduced to the arts in his teens through fellow contemporary, Athanasius Laborde, the late drummer from the LapoKabwit music group. He later took up acting in the group, Unity Theatre, which featured the likes of Darnley Labourne and Kentry Jn. Pierre.

When poet/director KendelHippolyte was staging a play in the late 1980s, Forde, then 18, was among the supporting cast. After running through the script a few times, Forde realized he had what it took to deliver the lines onstage – and so he did. He has never left the stage since – figuratively, that is.

“Kendel started giving me guidelines as to what the pros and cons of acting were and how to deal with a story and character,” Forde said. “Bit by bit, I began learning the intricacies of playwriting.”

Forde wrote his first play, “De Yard”, in 1984; it was directed by KendelHippolyte. In the play, Forde sought to bring out the redeeming qualities of life in what many saw as marginalized communities. Despite being poor in dollars, he was out to prove that they were indeed rich in the arts.

“The play basically said that not because someone comes from an impoverished community, that they’re not good people,” Forde tells me. “RasIsley, who grew up with me in the CDC in La Clery, is a good footballer. I’m a playwright and director. So that was the main theme of the play.”

Forde later told Hippolyte that he was interested in directing plays and a few workshops on basic directing skills with Hippolyte ensued. After “De Yard” was staged, Forde took up directing and has written scripts and directed skits at many calypso competitions over the years.

He has also written about a dozen plays over the years, staging most of them. His plays include “Anchor”, “Cold Vibes”, “They Playing Us Too Close”, “Silent Scars”, and “Rotten Way”. His plays focus primarily on social issues, evidenced by his treatment of domestic violence, HIV/AIDS and other themes. Moreover, he has also directed plays written by other playwrights. Forde has also won four awards for playwriting at the now-defunct M&C Fine Arts Awards.

Apart from coming up with the next best script, Forde is still fixed on fulfilling a lifelong dream, which will result in regional and international audiences getting glimpses into his playwriting mind.

“Right now, I want to take a group outside Saint Lucia because I’ve never staged a play overseas. So I plan to do that next year,” Forde tells me, with a hope that seems close to reality.

As a founding member of Gemstone Theatre, a theatrical unit formed in 1992, Forde says his top priorities include seeing the arts in Saint Lucia become sustainable and developing means of teaching the technical skills employed in theatre.

Currently typing up another new play, Forde says has been a challenge as the words keep flooding into his thoughts faster than he can type them. But after nearly 40 years in the business, he has learned a thing or two about slowing down a scene just so that the right portrayal gets centre-stage. After all, from a man who gets that much pleasure from seeing his words spring to life, his own life is in some sense a reflection of those words.

“Playwriting and directing have definitely made an impact on my life,” Forde said. “Just in doing something you like can bring out the best in you. In fact, whenever people give me positive feedback about my plays, I feel like I’ve made a contribution to society.”