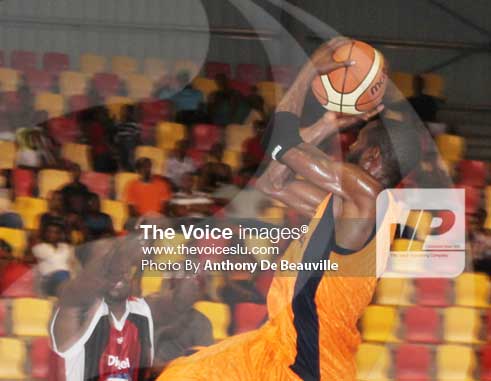 Share this post
NOW into its second year the quality of play in this year’s South Coast Basketball League tournament has gone up a few notches which augurs well for the sport in the south of the Island.

THE VOICE spoke to the Secretary of the League and Organizer Remy AvrilJr as to the overall running and the way forward for the SCBL. AvrilJr said, “This is the second edition coming from a successful tournament in 2014. This year we have eight teams; last year we had seven. The tournament is a highly competitive one with the addition of Run ‘N Gun All Stars and the St.Lucia Fire Services.

“We have three teams from Vieux Fort including the defending champions Darren Sammy 88 BBC, but there are also teams from Belle Vue and Micoud”.

She said players coming from the Castries League, had added a new dimension and excitement to the league.” There was some fraction in the Darren Sammy 88 BBC camp so some members moved onto Run ‘N Gun All Stars. Yes we do have players from out of the Castries League like KeganPreville and Ron Dumurville from Courts Jets and we welcome them.

“This event is community sponsored. The district representative Dr Kenny Anthony is on board, likewise a number of businesses within the community”.

Following the grand final the winner goes home with the championship trophy and a monetary prize which will be decided by the end.

VOICE: Are you pleased with the level of discipline and play on centre court?

AVRIL: “Oh yes! There has been a call for a rise in the level of discipline; it could be improved upon on. The level of play is a lot higher compared to that of last year with the addition of some quality players this time around

VOICE: What next for SCBL?

AVRIL: After this tournament, our season ends and then we start next year with the Independence Day Tournament”.

VOICE: Any chance for the schools within the District getting involved in SCBL?

AVRIL: We would like to do that, but we do not have the resources at the present. Hopefully with the national federation decision to develop Mini Basketball we will have the schools involvement and some more coaches as well. We just need the resources.

VOICE: Are you receiving any assistance from the St.Lucia Basketball Association?

AVRIL: I really wish they could do more. We don’t get much in terms of the technical aspects and equipment. We have to fend for ourselves most of the times, but they are trying. We are getting correspondence from them in terms of their development programmes. The International Basketball Federation (FIBA) is developing the whole structure of basketball. The local association would like to get SCBL under that umbrella. We are affiliated to the national federation as well.

VOICE: Teams to look out for heading into the quarter / semi final round?

AVRIL: The SCBL is a little different from other leagues. We have two sections, the regular season where everyone is playing round robin. The post season is double elimination which is a little different compared to the normal championship style tournament. We go until we get to a point of quasi semi final and then final”.

AVRIL: Come out and support the basketball in the south. We are doing as much as we can to lift the standard and quality. We also need the help financially”.