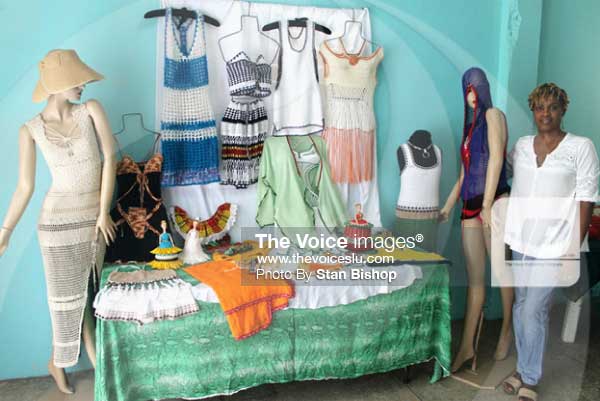 Share this post
WHEN Thelma William puts her mind to something, it usually involves her following up with a crochet needle and some thread.

From an early age, she has knitted her dreams into clothing items that have found their way into fashion shows here and abroad. The key to her longevity in the business, she told me recently, is her aim to crochet with a difference.

William has been crocheting ever since she attended Ave Maria Girls Primary School. One of the teachers there, Ms.Clyne, taught her how to read the crochet book and watching her mother do it only increased her interest in the art. When her mother realized she had taken a keen interest in crocheting, she would crochet something from the book and then have young Thelma do the same thing.

At age 14, William had already crocheted her first swimsuit. However, despite crochet being something she loved to do, she never gave any serious thought to doing it as a business. Cooking and baking were more her thing back then, she said. But that soon changed.

“After some time, I realized that I could do something with it because I really love it. It really became a passion for me then as it is right now,” William said.

At age 15, William taught crochet while attending the Corpus Christi Girls Vocational School after her teacher realized she was skilled at it. Instead of being in the class as a student, she ended up being the teacher.

After leaving secondary school, she worked as a receptionist, having done secretarial studies at technical college. She had basically put crocheting on the backburner, being caught up in the mundane tasks of a day-to-day job and being a mother.

After a few years, she picked up crochet from where she had left off and was soon crocheting pieces, later doing fashion shows with Russell Lake and JoycieMederick. In 2004, someone saw her work and spoke to Yasmine Walcott, who at the time organized the Miss Saint Lucia World Pageant. Consequently, her work was showcased in that fashion show. That’s when she created her own label, CWAD Fashions, the acronym meaning “crochet with a difference”, which she still owns.

After visiting Tobago Fashion Week in 2013, she came to the realization that she needed to take her business seriously after being exposed to the potential opportunities that can be created from the craft.

“It was really an eye-opener for me,” William admitted. “In fact, I actually opened Tobago Fashion Week that year with my designs. I had dresses, swimsuits, vests for guys, and so on. It was really a crowd-pleaser, as had been the case when I showcased my designs in Saint Vincent and the Grenadines in 2005 and 2006.”

Upon returning to Saint Lucia from Tobago, William underwent a three-week sewing course with the Ministry of Commerce. As such, she now incorporates sewing into her crochet. William’s clothing has also been featured at Saint Lucia Hot Couture in 2014 and 2015. The spin-offs from the fashion show held during May, she said, have been encouraging since she was able to do a bit of networking and sales.

Among the items William makes are dresses, formal wear, lingerie, swimwear, beachwear, casual, earrings, and hoodies. She also makes custom-made pieces. Currently running her business from home, William said among her priorities is opening a store in the city to showcase and sell her items. For now, though, her Water Works, Castries home suffices.

“Right now, I’m really enjoying my crochet. I’ve been doing some workshops every opportunity I get. So I believe the world is my oyster,” the fifty something-year-old designer said.

William said the main stumbling block she faces has to do with finances. However, she conceded that had she pushed herself a bit more in the past and not been as laid-back as she was, things could have been way better for her business. Nevertheless, she believes that nothing happens before its time and so far everything seems to fall into place.

William also participated in the Courts Fashionista show held this year, referring to it and “an eye-opener”. She will also be participating in this year’s Saint Lucia/Taiwan Partnership Trade Exhibition at the Johnsons Centre in Rodney Bay scheduled for late November.

Among her priorities is to promote the crochet art form, which she thinks is a dying art in Saint Lucia. Many youths, she said, believe that being a designer or seamstress is something that one does only when one cannot find an alternative job. That culture needs to change, William insisted.

“What they need to understand is that designing and crocheting are things that one needs to love,” William said. “For instance, I can see anything and get inspiration from it. Something happens every day that makes me fall in love with my job more and more. That’s why I really want to teach crocheting. So the next step is for me to certify myself and then start teaching.”

Samples of William’s work can be found on her Facebook pages: Thelma William, and Yajole (St. Lucia) Modelling & Fashion Agency, and she can be contacted at 286 7611. Prices are negotiable, she said. She’s also on a mission to debunk some myths about crochet as well.

“I just want people to know that whatever their size might be, they can fit into crochet because it’s a mindset. Crochet is something that anyone can wear,” William said.

Coming from a fashion designer who seems to have her mind made up that she’s in the line of work that creates a difference in people’s lives, she probably has a keen needle’s eye for detail.