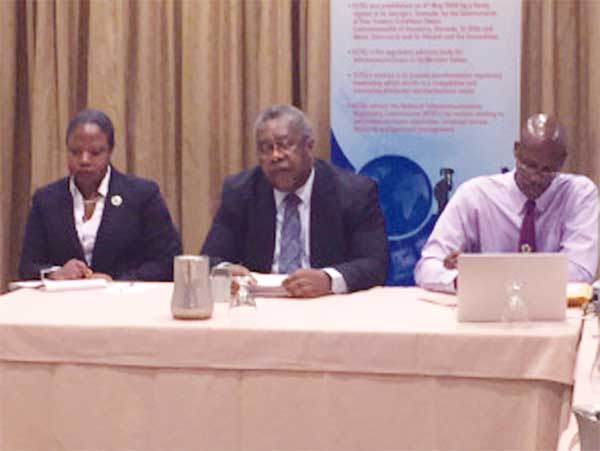 THE Eastern Caribbean Telecommunications Authority (ECTEL) says it has rejected amendments to an agreement for a merger between Cable and Wireless and Columbus International’s FLOW which recently announced an increase in broadband rates.

ECTEL took this decision at its Council of Ministers meeting held in St Kitts last week. It said that at a meeting with the merging parties three months ago, Cable and Wireless and Columbus had expressed their commitment to the goals proposed by the Council on matters relating to net neutrality and the unrestricted use of Over the Top Services, roaming, a harmonized entry level broadband package and permitting customers to migrate to the most favourable service plan for them.

The merging parties had also committed to working with the Council of Ministers and ECTEL to ensure that services were offered at affordable prices and at the highest quality levels.

During that meeting, the merging parties accepted the conditions proposed by ECTEL for approval of the integration of their business. These conditions include:

(i) Access by other licensed telecommunications providers to the facilities of the merging parties on a non-discriminatory basis;

ii) Provision of basic retail broadband internet service in each of the Member States with transmission speeds of at least 5 Mbps, priced per year at not more than 3% of GNP per capita;

(iii) Allowing their customers of fixed broadband, fixed voice and subscriber television services to migrate to another plan without the imposition of penalties;

Subsequently, ECTEL submitted a draft of the Agreement reached for perusal by the merging parties.

ECTEL said that on September 14, it received in response an amended version of the draft Agreement from the merging parties adding: “Having reviewed the amendments it was found that they rendered the Agreement unenforceable.

The proposed amendments from the merging parties have therefore been rejected by ECTEL”.

ECTEL said it was unacceptable that at this time when the wordings of conditions agreed to were being finalized, FLOW had announced its intention to increase broadband rates in the territories affected by the merger.

“This announcement goes against the spirit of the discussions between the merging parties and the Regulator”, the ECTEL release said. It added:.

“The Council demands that the merging parties honour the commitments including the provision of services at affordable prices, which have been made to the Regulator and also announced publicly.

“It is the Council’s desire to continue to protect the interest of consumers and advocate in the best interests of the citizens of the ECTEL Member States. We encourage all stakeholders including consumer agencies to come together in a united effort to ensure that the merging parties adhere to and not delay implementation of the conditions agreed with the Regulators”.

ECTEL also promised to provide full support to the efforts in Grenada to address the situation based on the powers of the Regulator as provided for in the revised Retail Tariff Regulations.

All Ministers have committed to passing all outstanding regulations and to expedite the finalization of the Electronic Telecommunications Bill, which are designed to strengthen the powers of the Regulators in the ECTEL Member States.