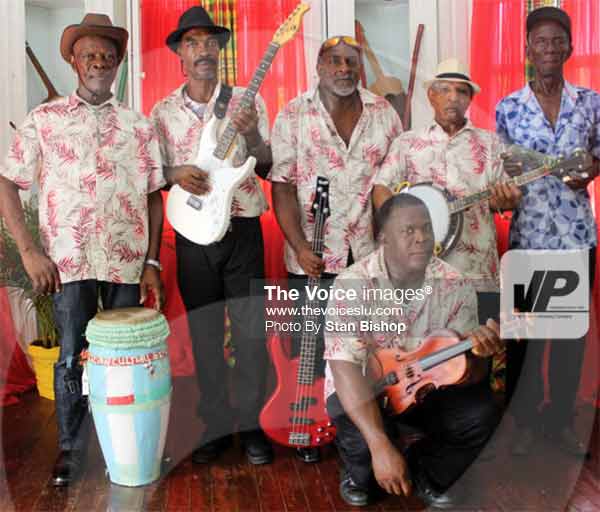 Share this post
AMONG the growing number of Saint Lucian folk bands making their mark through their sweet melodious notes is the Eastern Folk Band from Mon Repos, Micoud.

Formed by a few members nearly two decades ago, some of whom have since passed, the band is currently on a mission to get people – especially Saint Lucians – to appreciate the true value of the island’s own music.

Leader, Angus Jn. Baptiste, began playing with the band from its inception, rubbing shoulders with some of the premier folk musicians at the time, learning their skills and perfecting his.

Prior to joining the band, Jn. Baptiste attended the St. Lucia School of Music where he did Music Theory and sat the ABRSM (Associated Board of the Royal Schools of Music) exams. But that was just to become familiarized with the violin, he said, since the technique and method of playing the violin are totally different from that of folk.

The band was formed in 1997 and Jn. Baptiste still remembers being able to play only five songs on the violin when the band started getting gigs. Two other players were in the band at the time: a guitarist and a banjo player.

Nevertheless, the band has been able to make a few changes to adapt to the years since then and its current members are Charles Desrivieres (drummer), Peter Celise (shak-shak), Allan Felix (banjo), Joseph Edward (guitar), Mr.Monero (bass guitar) and Jn. Baptiste (violin).

The band has since travelled extensively across Saint Lucia, including playing during the Saint Lucia Jazz & Arts Festival. For many years now, the Eastern Folk Band has provided entertainment in the lobby at Coconut Bay Resort & Spa in Vieux Fort, giving guests a palatable mix of traditional Caribbean folk rhythms.

The Eastern Folk Band has also brought their musical talents abroad, touring French Guiana last year and participating in Martinique’s quadrille festival earlier this year. St. Croix is also on the short list of foreign destinations where the popular band has performed.

So just what’s so special about this Saint Lucian Creole music that gets so many people shaking a leg or two in a festive mood? Jn. Baptiste tells me that the simplest definition of Creole music is “music for the people”.

“Every country has its own folk music,” Jn. Baptiste told me in a recent interview aboard pirate ship, ‘The Pearl’, on which the band had a gig. “In the United States, western music is considered folk music. If you listen to that kind of music carefully, you almost hear the sound of the train on the track. The rhythm epitomizes that. But in Saint Lucia, we are from a different past; our roots go back to slavery. Regardless of how you look at it, our past is based on our movement from Africa. Our music is a mixture of the African and European influence, especially Scottish/Celtic music.”

Jn. Baptiste said most of the folk music had already been set down from eons ago. However, what a violinist like himself is able to do is to treat the music differently by changing it up just a bit.

“So the music can be interpreted or arranged differently to create a new feel. But basically, the structure and harmony are already set and one cannot move so far away from it,” the violinist explained.

With Caribbean people being a lively people, Jn. Baptiste said most of the region’s music is played in major keys, musical keys used to bring out joyous expressions as opposed to minor keys that are more subdued. This, he added, serves to remind Caribbean people that despite what they have been through and are going through, they continue to survive. However, Jn. Baptiste believes that Saint Lucians are not highlighting the folk music as much as they should. He said the music is being downplayed.

“If it’s for free, everyone enjoys it. If it involves financial or human resource, then we believe it should be for nothing,” the violinist stated. “That’s the sort of mentality that we need to get away from. We need to understand that talent and creative ability are worth the cost because the outlive personal existence. So music is the nexus that moves one generation into the other.”

But all is not lost, the band leader conceded. As long as there are folk bands willing to pick up their musical instruments and dive into a few pools of major keys, the island’s sweet folk music will continue to resonate with the people, if only for one vital reason: as a unifier.

“Regardless of what social status you occupy in society, once you hear folk music, you connect with it immediately. It’s almost like a magical expression that makes you a Saint Lucian. Something like this is priceless. It’s not something you can add value to, yet the people who bring it about are never really honoured for it,” Jn. Baptiste said.

This JounenKwéyòl season, the band has a few gigs and the boys hope to win over a few fans who have not yet heard their music. The band has also produced two CDs. For bookings and CDs, contact Jn. Baptiste at 489 0914.