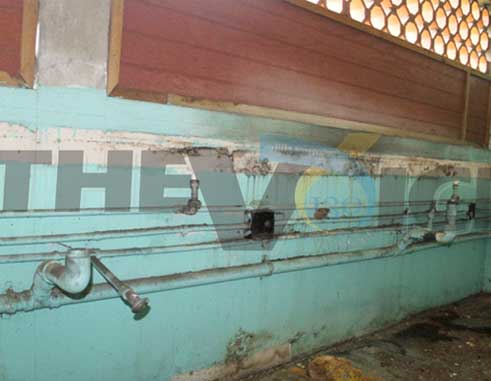 TEACHERS and students of the Castries Comprehensive Secondary School (CCSS) were absent from school yesterday, the result of longstanding structural damage to the learning institution.

The cessation of normal classes at the school began last Monday and yesterday’s absence was the result of a directive given by Chief Education Officer, Marcus Edward, following a meeting held on Thursday.

At issue are a number of concerns teachers and students share regarding the school’s structural integrity. These include falling concrete from the school’s ceiling, “bleeding” of the concrete roof, black mould in the science block, termite infestation, leakages and general wear and tear.

Earlier this week, teachers stayed away from their classes while they met with union officials to vent their frustrations over the concerns that have festered for years now. In lieu of the teachers’ absence from classes during that period, the students were supervised in their classrooms by school prefects.

Principal, Marva Daniel, told The VOICE yesterday that it was at Thursday’s meeting that the decision was taken to suspend classes until next Tuesday. She said that upon return to school next week, teachers will meet with their union again to indicate whether their concerns had been adequately addressed by the Ministry of Infrastructure, under whose aegis the maintenance of public schools falls. 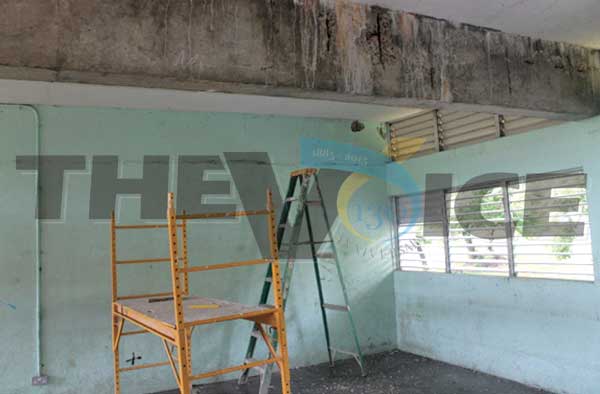 When The VOICE visited the school yesterday, about a dozen workmen were seen doing restorative work in some of the classrooms. Daniel said they were part of the Ministry of Infrastructure’s effort to remedy the situation.

The principal said the action taken by teachers this week was not tantamount to a sit-in but rather teachers concerned about their safety and that of their students in the classrooms. Teachers and students, she said, had had enough and felt justified in taking the action they did.

“They have a right to do so according to our Health and Safety Act,” Daniel said. “What we’re seeing now is that teachers and students have consolidated their efforts. The Students’ Council’s president and her class representatives met with me and have brought forward their concerns.”

The issue of health and safety at the island’s public schools has been a perennial headache for not only students and teachers but also the Ministries of Education and Infrastructure. So much so that Minister for Education, Dr. Robert Lewis, had a meeting with secondary school students at the Mental Health and Wellness Centre yesterday where the students were expected to voice their similar concerns.

Daniel said the relevant authorities know that the school’s problems are nothing new. She said that when she became the principal in June, 2010, “the record showed that the report was already presented and forwarded”, referring to correspondence between the school and the Ministry of Education about the school’s failing conditions.

“When I became permanent here at CCSS in 2011, I was asked to re-forward the same report,” Daniel said. “I didn’t have to produce a new one – it was the same report. When my District Education Officer took office in 2012, she asked for a copy of that same report, which we augmented because things had escalated at the school.”

Daniel said that some years ago students and teachers even resorted to cleaning up the school themselves despite their meagre resources. The Caribbean Environmental Health Institute (CEHI) did an assessment at the school some years ago, following which the Ministry of Education ordered that the school be shut down.

For now, Daniel is hoping that come next Tuesday, “we’ll have some semblance of improvement and (that) teachers and students can feel safer”. Nevertheless, she believes that the school plant needs to get the quality attention it deserves.

Since news of the disruption of classes at CCSS broke out this week, Daniel said former students of the school have contacted her to find out how they could help. The school is also hosting a fund-raising ball next weekend.