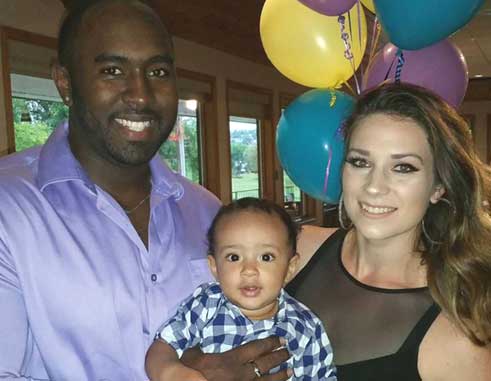 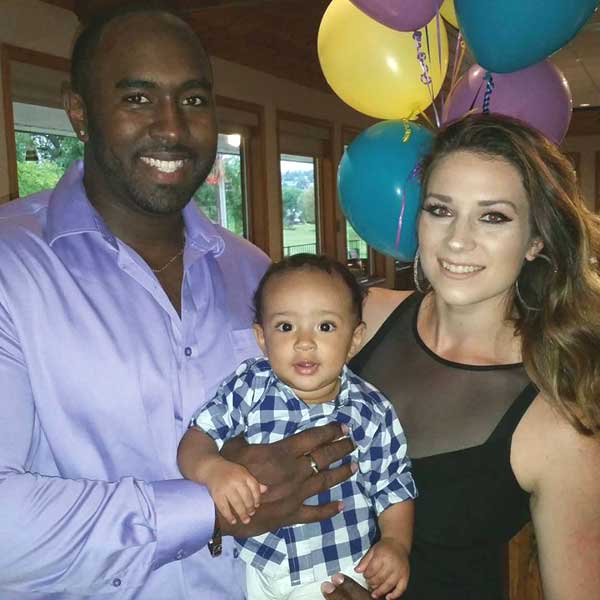 HOW many of you readers know what that term means? Not too many, huh?! Well, to those who don’t know, it refers to individuals who engage in interracial relationships…just picture a chocolate and vanilla swirl ice-cream. Do you get the picture now?

Well Arnold Henry is definitely down with the swirl and has gone on to become one half of a successful and happy family man with his newly engaged fiancée who just happens to be Caucasian.

The 30 year old St Lucian is a former NCAA Division I basketball player, a non-fiction author, a skills development basketball trainer and a motivational speaker who strives to inspire youth through personal life experiences.

Henry is perhaps well known for being very open about his relationship, among other aspects of his life via social media and has documented the progress of his romance including the birth of his first son and the big night when he proposed to his girlfriend turned fiancée, Stephanie Beninger.

For centuries, interracial relationships have set tongues wagging especially in the case of a black and a white partner. Whilst this has become more common and accepted across the globe and it has been predicted that at some point in the future, the majority of the world’s population will be biracial, there is still a massive fraction of individuals who strongly condemn this occurrence as they see it as an abomination and they also accuse the people who engage in these relationships of being traitors to their own race.

Racism and prejudice plays such a huge role in these cases that couples have found themselves being attacked verbally and physically. The problem doesn’t end there as it trickles down to the children of these individuals who sometimes find themselves being ostracized by both communities who are not willing to accept them.

This is where Henry comes in to speak to me about these boundaries and breakthroughs. He is living the life and so today, my FITC is answering the questions that most of us want to know the answers to.

The VOICE: You have been one half of an interracial relationship for a few years now, tell me what that it is like to find love outside of your race.

Arnold: I found it very intriguing that I can learn about my partner’s background and culture and love her no less than if we grew up in the same country.

The VOICE: Was it a conscious decision that you made to date a Caucasian or was it just a natural feeling of falling in love (explain).

Arnold: When I met my partner, I was not searching for what race she was able to bring to the table. I was simply seeking happiness, a best friend, loyalty and someone who had the same dreams as me especially a loving partner who is career driven and family oriented.

The VOICE: Why did you choose to settle with someone outside of your race?

Arnold: Settling with someone outside of my race had no impact on my decision to date my fiancée who just happened to be Caucasian when I fell in love with her.

The VOICE: Are you aware of society’s views, both negative and positive on this kind of union from both races involved?

Arnold: Yes, we are both aware.

The VOICE: Have you and your fiancée ever experienced any form of discrimination because of your union? If so, how did you two deal with it?

Arnold: As a couple, we’ve only experienced discrimination once from a stranger via a Facebook post. Although I tried to ignore the racial slurs, I decided to expose the culprit via social media and then use this as opportunity to spread love by reminding the world to love one another no matter their skin colour. The slurs had no effect on our decision to love each other.

The VOICE: What has the reception from both your families and friends been like towards each other?

Arnold: There hasn’t been anything out of the norm. Everyone treats each other like respectable human beings.

The VOICE: You two have an adorable son together. Are you at all worried about the stigma and possible discrimination that he might face in the future?

Arnold: At this point, we’re not worried at all seeing that he is a new born. We do believe that the world is more accepting of biracial families. We will definitely have to give our son some history lessons about racism and, as parents we plan to teach him to love everyone.

The VOICE: Cheeky question, is there a difference between dating a black woman and dating a white woman? (If so, do tell)

Arnold: Sorry to say but I’m not one who is interested in knowing the difference between a black woman and white woman. From my experiences with dating women, they are all different in many ways.

The VOICE: To the people out there who disagree with this kind of union, what would you like to say to them?

Arnold: Let’s help make this world a better place by spreading love for each other rather than hate. Love has no colour.

The VOICE: Finally, to the black women who feel “robbed” as “they’ve lost one more good black man” what would you say to them?

Arnold: Maybe it is time to be open-minded to other races, backgrounds and/or cultures. In addition to that, the world just has to accept the uprising of biracial families.