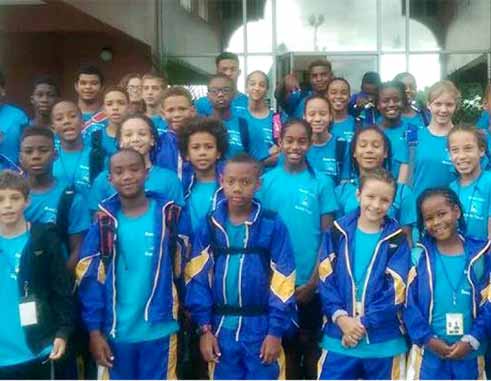 According to Sue MonplaisirSt.Lucia Amateur Swimming Asociation Public Relations Officer, the Goodwill championships served as an opportunity for St. Lucia’s age group swimmers who wanted to make it to the next stage of competitive swimming, to step up and compete with some of the best swimmers in the Southern Caribbean.

Walking away with Gold was AbbiePultie swimming in the 50 metre breast, and the 13 – 14 relay team comprising of Katelin Samuel, Veronica Brown, AbbiePultie and MikaelaCasimir swimming their 400 Metre Medley Relay.

This was coach Romain’s second time leading the team. He congratulated all the swimmers on their achievements. Romain thanked the coaching staff Henry Joseph and Vernessa Eugene, team manager Lily Bergasse and chaperones, Jean Mederick, Brender Portland-Reynolds and Jamie Steid for all the support given to the team.